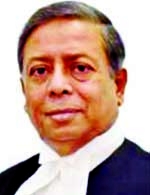 Staff Reporter :
Justice Mirza Hussain Haider, a judge of the Appellate Division of the Supreme Court, on Sunday questioned the independence of the judiciary in his farewell speech.
"The judiciary is constitutionally independent, but actually it is understood and known to all how much the judiciary is independent," said Justice Mirza Hussain Haider in his online farewell speech. There were 192 participants in the online farewell given by the Chief Justice Syed Mahmud Hossain and four Appellate Division judges.
"We are now hearing smell of the corruption in the judiciary," Justice Mirza Hussain Haider said.
He also requested all not to make court's verdict 'controversial' illogically without examining laws, knowing the facts, information, and data of the particular case.
"Making a comment about a judge or a verdict or make the judge controversial after a verdict goes against a party is injustice," Justice Mirza Hussain Haider said.
Justice Miza Hussain Haider expected that the executive branch of the state would become more sincere to implement orders, directives and verdicts of the Supreme Court as the Supreme Court's decision is binding upon all the courts.
Justice Haider fulfilled his 67 on Sunday and concluded his judicial life from the Appellate Division of the Supreme Court.
He obtained LL.B. (Hons) and LL.M from the University of Dhaka. He was enrolled as an Advocate of the District Court, the High Court Division and the Appellate Division of Bangladesh Supreme Court in the Year 1979, 1981 and 1999 respectively.
He was elevated as an Additional Judge of the High Court Division on July 3 in 2001 and appointed as a permanent Judge of the same Division under Article 95 of the Constitution on July 3 in 2003 and elevated to the Appellate Division of the Supreme Court of Bangladesh on February 8 in 2016.
He participated in international conferences, symposium, training programs held in Lucknow, India (2003), South Korea (2006), Kolkata, India (2007) and Manila, Philippines (2010).
The judge visited Australia, Bahrain, Bhutan, China, France, India, Malaysia, Nepal, the Philippines, Saudi Arabia, Singapore, South Korea, Thailand, United Kingdom, United States of America and Uzbekistan.