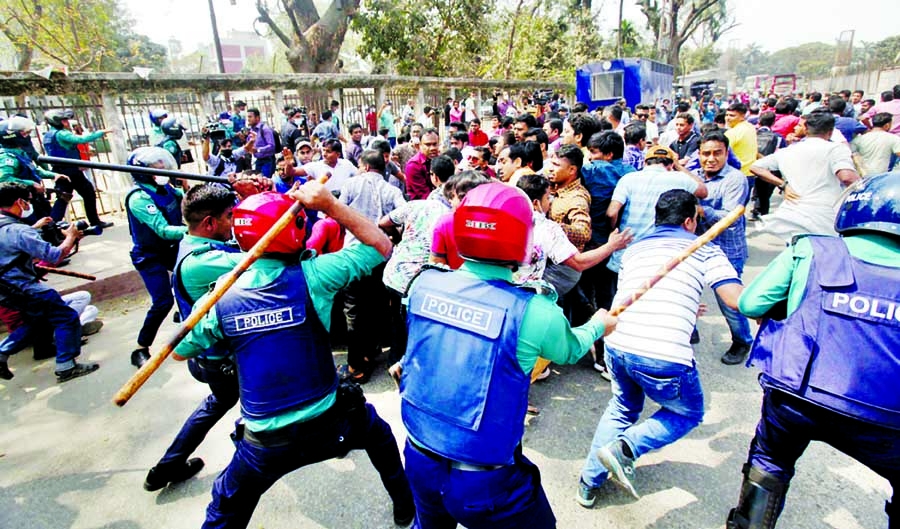 Police beat up Chhatra Dal activists in front of the National Press Club area in the capital on Sunday.

Staff Reporter :
Police have fired rubber bullets, lobbed tear gas shells and charged baton on the Jatiyatabadi Chhatra Dal (JCD), student wing of de facto opposition Bangladesh Nationalist Party (BNP), leader and activists on Sunday.
The incident took place in front of Jatiya Press Club as JCD members tried to gather to protest the death of writer Mushtaq Ahmed in jail custody and the move to revoke the gallantry award of former president Ziaur Rahman.
The rally was foiled even before it started. A clash broke out between police and the JCD men. Amid Chase and counter-chase, police fired rubber bullets, lobbed tear gas shells and the area turned into a battleground. More than 50 activists, police and journalists were injured. Police took nine persons into their custody for questioning.
As per a prior-announcement, leaders and activists of different levels of JCD started gathering in-front of the Jatiya Press Club and adjacent areas at 10am. The police stopped them as a section of leaders and activists tried to get out of the press club around 11am, the activists and eyewitness said.
At one stage, some leaders and activists of JCD came out and sat on the road. The police charged baton on them. Activists of JCD and BNP men became agitated.
Later, the chase and counter-chase began between the law enforcers and JCD leaders-activists. The BNP and JCD men threw brickbats at the police. Police fired blank shots, rubber bullets and lobbed tear gas shells to disperse BNP and JCD men, the activist and eyewitness said.
They also said that at 11:30 pm, some BNP-JCD men entered the Jatiya Press Club in the face of police chase. The police entered there and charged baton. Following the police chase, some protestors took position near of the BMA building. They started chanting slogans from there.
After the clash, many injured activists were rushed to Dhaka Medical College Hospital, but police raided there and detained seven, the witness said.
Dhaka Metropolitan Police's (DMP) Additional Deputy Commissioner of Ramans zone Harun-or-Rashid said that they had detained at least nine activists after the clash for verifying their names and identities.
He also said that JCD activists attacked them and hurled brickbats at the police members. Seven to eight policeman were injured two of themÂ  seriously. They received treatment at Dhaka Medical College Hospital and the Central Police Hospital.Â  Â
BNP secretary general Mirza Fakhrul Islam Alamgir was inside the press club when the clash broke out and he left the place by a car. Dhaka Metropolitan South BNP president Habib-un-Nabi Khan Sohel was present at the place of occurance.
Eventually, the protest was called off before the rally could begin.
JCD's president Fazlur Rahman Khokon told reporters that they didn't go there as the police attacked them before the peaceful assembly started.
He also said that over 50 persons including JCD men, journalists and staff of press club were injured in the clash. Police picked up some of their activists from the spot. Â
DMP's Deputy Commissioner (DC-Ramna division) Sajjadur Rahman said that the JCD did not take any permission to hold a rally here. They took to the streets with 400-500 activists from inside the press club and attacked police.
They also threw brickbats from inside the press club. Seven to eight policemen were injured in the incident. Some people were taken into custody, he said.
The official also claimed, "The attack was pre-planned. There were not many bricks inside the press club. Where from did come so many bricks? Legal action will be taken in this regard."