US keen to invest in edn, health & tourism sector in Ctg 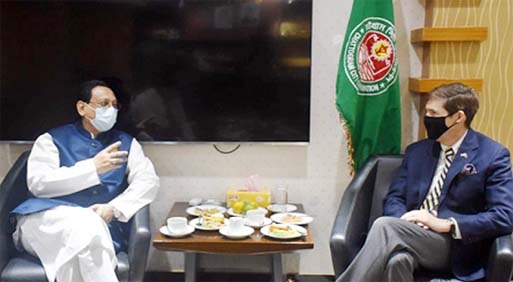 Chattogram Bureau :
The US AmbassadorÂ  in BangladeshÂ  Mr.Â  Earl Robert Miller said the USÂ  isÂ  interested in investing in education, health and tourism in Chattogram. On this basis, a positive decision will be made on how much the United States can invest in this sector.
The Ambassador said that in view of the economic and geographical importance and immense potential of Chittagong, we are interested to invest here.
There is a clear possibility that the positive impact of the way big projects are being implemented in Chittagong now and in the future will be reflected in the national, regional and international arena as well.
The ambassador made the remarks during a meeting with ChattogramÂ  City Corporation (CCC) Mayor M Rezaul Karim Chowdhury on Sunday last at latter'sÂ  conference room. US diplomat paid courtesy call on City Mayor.
He highlighted the vigilance, prevention and success in tackling the global epidemic Covid-19, saying that although Bangladesh is a densely populated area, the rate of covid infection and death is much lower than that of developing and developed countries.
This has been possible due to the able leadership, efficiency and foresight of Prime Minister Sheikh Hasina. I certainly hope that the whole world, including Bangladesh, will win.
Welcoming the ambassador and the delegation, the mayor said Chittagong is the gateway to the south-eastÂ  Asia . It is one of the major natural ports in the world.
With the addition of regional connectivity centered on the port of Chittagong, the economic progress of the eastern part of India, bordering countries including Nepal, Bhutan and Myanmar to Kunming City of China will be revitalized.
He said Bay Terminal, Bangabandhu Industrial City, Matarbari Power Project, Deep Seaport, Expansion and Modernization of Chittagong Port, Construction of Tunnel under Karnafuli River, Elevated Expressway, Railway Expansion from Chittagong to Cox's Bazar, Outer Ring Road. Â
With the implementation of the construction projects, Greater Chattoram is going to be considered as a fertile ground for foreign investment in industrialization and multidimensional development through the establishment of new tourist spots, sub-cities and economic zones.
Chief Executive Officer of CCC Kazi Muhammad Mozammel Haque, Acting Secretary and Chief Revenue Officer Mofidul Alam, Private Secretary to the Mayor Muhammad Abul Hashem, Additional Chief Engineer Rafiqul Islam Manik and others were present on the occasion.