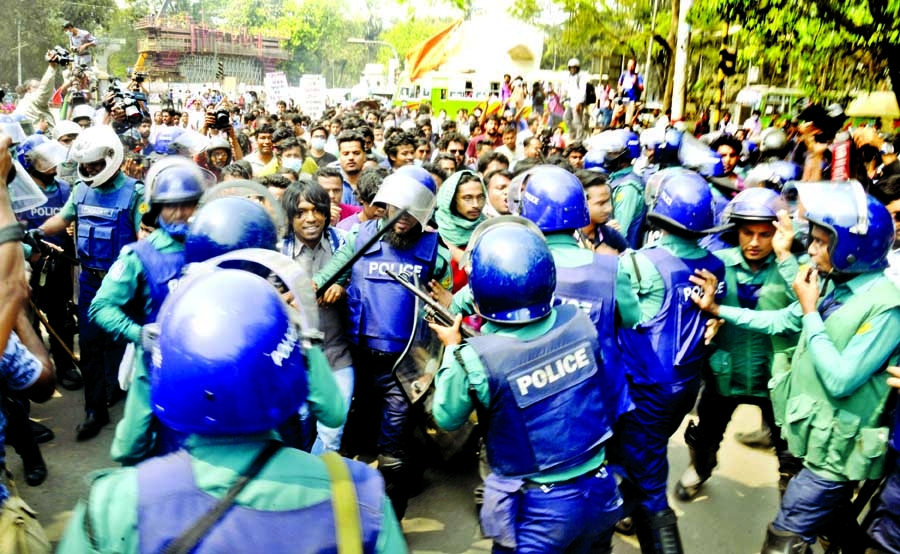 Staff Reporter :
Activists of left-leaning student organizations have demonstrated to call for a three-point demand including repeal of the Digital Security Act on Monday.
However, the police barred them in front of Secretariat when they were besieging the home ministry. At that time, they sat in front of the adjoining DPDC building in the Secretariat area and chanted slogans.
Later they ended their protest program for today and said that they will announce the next course of action from a press conference soon.
The eyewitness and activist said that more than 200 leaders and activists brought out a procession from Raju Sculpture in TSC area around 12 noon demanding the investigation and justice of the death of writer Mushtaq Ahmed, second unconditional release of cartoonist Ahmed Kabir Kishore and their other associate who are in jail, and repeal of the Digital Security Act.
They marched towards the Secretariat to besiege the home ministry, through central Shaheed Minar and Doel Chattar. But a police team tried to stop them. After a brief scuffle with the police, the leaders and activists of the left-leaning student organizations started marching towards the Secretariat.
When the procession reached in front of High Court gate area near secretariat area, police were barricading them on the road. That time there were create tension. The activists were arguing with the police and demanded move forward to besieging the home ministry around 12:30pm. At one stage they remove the barricade and move forward.
But a team of police led by DMP's Additional Deputy Commissioner of Police Harun-or-Rashid was already position in front of the DPDC building adjacent to the Secretariat. And the police barred again and surrounding them. Later, the activist was sat there and chanting slogan.
There were no immediate reports of any violence.
One protester Mahfuza Akhter said that the state must take responsibility. Writer Mushtaq has been killed; it was not a natural death. How come he was held for nine months in jail without any justice?
Â "We want justice," she said.
Meanwhile, Nasir Uddin, central committee's general secretary of the Socialist Student Front, said that they had succeeded in encircling their home ministry despite police obstruction.
Biplobi Chhatro Moitry's Central President Iqbal Kabir said that the various organizations have come together here. In the meantime, they have started talking to people of different classes and professions, including university teachers. We will later turn this procession into an anti-fascist protest.
We will announce the next program through a press conference later, he added.
After his speech, the leaders and activists left the road at around 1:15 pm and traffic resumed on this road.
DMP's Additional Deputy Commissioner Harun-or-Rashid told the reporters that we have requested them to stop here (in front of DPDC building). They have kept our request. They have peacefully submitted their demands to the authorities. Their program ended peacefully. There was no clash occured. Â
Leaders and activists of leftist student organizations clashed with police in Shahbag last Friday evening during a torchlight procession demanding the investigation and trial of the writer Mushtaq's death in custody and the repeal of the Digital Security Act. Eight leaders and activists of the alliance have been arrested and are in jail in connection with the case. Besides, labor leader Ruhul Amin was arrested from Khulna on Friday night They are all in jail now.