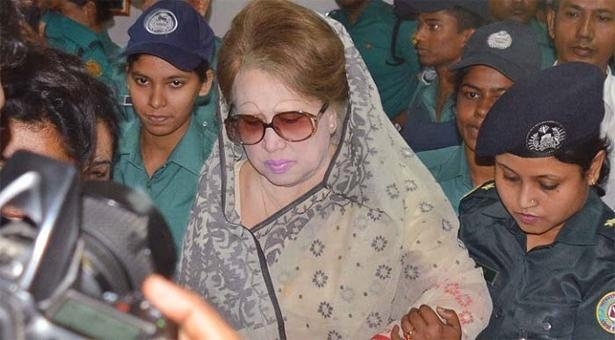 Court Correspondent :
The Ninth Special Judge Court of Dhaka yesterday fixed March 18 for hearing on charge framing in Niko graft case against BNP Chairperson Begum Khaleda Zia and others.
Judge Sheikh Hafizur Rahman of the special judge court passed another order on Tuesday allowing Begum Khaleda Zia's lawyers Masud Ahmed Talukder and Syed Joinal Abedin Mesba to appear in the court in absence of the BNP Chief. The court passed the orders at the newly built courtroom in front of Keraniganj Central Jail.
At the end of yesterday's hearing, the defence pleaded for time while the court adjourned the hearing till March 18.
Â Besides, the defence lawyer pleaded for discharging Khaleda Zia from the case.
The Anti-Corruption Commission (ACC) filed the case against five including Begum Khaleda Zia with Tejgaon Model Police Station on December 9 in 2007, on the charge of abusing power in signing a deal with Canadian company Niko for exploring and extracting gas.
The ACC on May 5, 2008 submitted the charge-sheet against 11 including Khaleda Zia. They accused them of incurring a loss of more than Taka 13 thousand crore of the state exchequer by the deal with Niko. Â
The other accused in the case are BNP Standing Committee member Barrister Moudud Ahmed,Â  then Principal Secretary to the Prime Minister Kamal Uddin Siddiqui, former acting Secretary at the Ministry of Energy and Mineral Resources Khandaker Shahidul Islam, former Senior Assistant Secretary CM Yusuf Hossain, former Bapex General Manager Mir Moinul Haque, former Bapex Secretary Mohammad Shafiur Rahman, businessman Gias Uddin Al Mamun, former Bagerhat MP MAH Selim and Niko's Vice-President for South Asia Kashem Sharif.
The ACC accused them of incurring a loss of more than Taka 13 thousand crore of state exchequer by that deal.
Khaleda is now in her house at Gulshan following an executive order of the government while BNP leaders Moudud Ahmed and three others are on bail. And three others have been absconding since the case was filed against them.Â