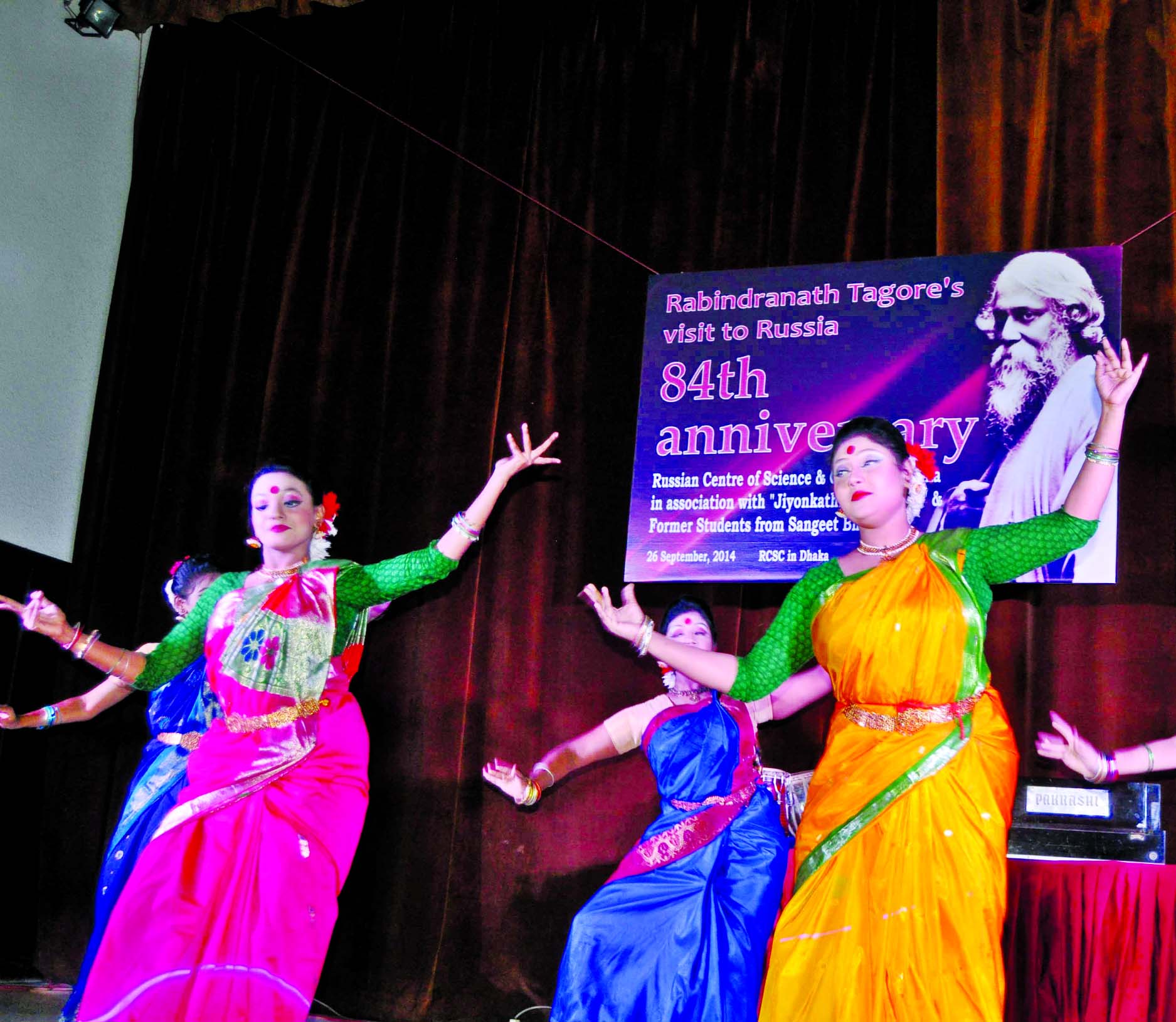 Art & Culture Report :
The Russian Centre for Science & Culture (RCSC) in Dhaka with the literary organisation Jiyonkathi, former students from Sangeet Bhaban and Spandan, a dance troupe, organised a discussion meeting and colourful cultural evening dedicated to the 84th anniversary of Rabindranath Tagoreâs visit to Russia.
As guests of honour at the evening attended by eminent Tagore researcher and poet Ahmad Rafique and Zahid Reza Noor, Deputy Feature Editor of daily Prothom Alo.
In the welcome greeting to the audience Director of the RCSC in Dhaka AP Demin described the Nobel Laureate Rabindranath Tagoreâs meetings with representatives of literary intelligent in Soviet Russia, in particular, by Mikhail Bulgakov, Alexei Tolstoy and other great writers of the time.
Rabindranath Tagoreâs visit had a noticeable effect on the convergence of Russian and Bengali culture. And at the moment works of Rabindranath Tagore continues to attract great attention of literary circles of the Russian Federation and is an example for the development of
cultural relations between Russia and Bangladesh.
Poet Ahmad Rafique, spoke in detail about Rabindranath Tagoreâs literarily works, his philosophy and visit to Russia.
Poet Ahmad Rafique said that when Rabindranath Tagore reached the former Soviet Union a lot of bumps it was valuable and important moment for him. After immediately finished World War-1 then Soviet peopleâs lifestyle, educational systems and social life particularly moves his philosophical spirit. Tagore wrote on his letters of Russia he learn so many thing about humanity and peoples unity from the Soviet peoples.
Opening of the cultural show members of Jiyonkathi recited Letters of Russia, which he wrote under the impression from what you see in Russia at that time. The recital dedicated to Tagoreâs visit to Russia has drawn attention of the audience.
With heartthrob the audience listened to the beautiful songs by former students from Sangeet Bhaban as well as members of the dance group 'Spandan' performed there brilliant dances included Mon more megh-er o songi, Esho shaymol sundoro, Aamar o poran-o jaha chai and Purono sei dener kotha under the guidance of the unique
choreographer Anik Bose.
The event to the RCSC in
Dhaka was a very remarkable cultural event to memorised outstanding Bengali poet and writer Rabindranath Tagore.