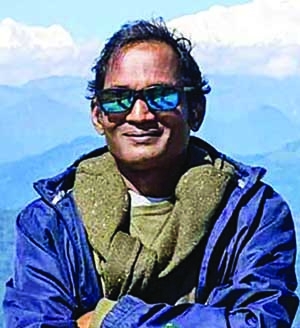 The High Court on Wednesday granted bail to cartoonist Ahmed Kabir Kishore for six months in a case filed under the Digital Security Act (DSC) on charge of deteriorating law and order situation during Covid-19 pandemic.
The HC bench of Justice M Enayetur Rahim and Justice Md Mostafizur Rahman passed the order after holding hearing on a bail petition filed in this regard.Â  Writer Mushtaq Ahmed, another accused of the case, died at Â Â Â Â  Â night on February 25 last at Kashimpur High SecurityÂ Â  Jail-3 in Gazipur in the same case, also sought bail in the same petition. He had been locked up for over nine months in the custody.
The court granted bail to Kishore as he was behind the bars for a long time and the reinvestigation of the case was underway, the judges said.
Barrister Jyotirmoy Barua appeared in the court for Kishore, while deputy attorney general Sarwar Hossain Bappy represented the state.
Jyotirmoy Barua said, "There is no other case against Ahmed Kabir Kishore. As a result, there is no obstacle to his release from jail. We will try to complete this process in two to three days."
The lawyer, however, submitted an affidavit to inform the court about Mushtaq's death.
Sarwar Hossain Bappy said decision on whether to go to the Appellate Division against the bail order will be made after consulting senior officials.
A total of 11 people, including Kishore, Mushtaq and Rashtrochinta activist Didarul Islam Bhuiyan, were prosecuted under the DSA by Rab-3's Assistant Director Abu Bakar Siddique on May 6 last year.
Didarul and Mihaj were granted bail in September last year, Mushtaq died in custody on February 25 last and Kishore has been behind bars for ten months.
During the hearing on Monday the lawyer also said, "How law and order deteriorated by the doings of Kishore Ahmed there is no mention of it in anywhere of the FIR. Even there is no description in this FIR as to how his doings mislead the people."
"He is a cartoonist. It is nothing new that a cartoonist draws cartoon over different issues criticizing the various actions of those in government. He is also a rights activist. He is working for the third gendered people."
If there is any confusion in the new law, the accused will get the benefit of it, not the police, added the lawyer.
He also said, "Appearing in a trial court on February 23 last, Ahmed Kabir Kishore informed us that he had been physically tortured in custody. His right ear has become almost impaired due to torture. Injuries to the left leg caused by the torture have now reached the stage of soreness."
"We mentioned all those descriptions in the trial courts. But we didn't get bail. Another accused died due to his sickness. He is also seriously sick." After hearing the lawyer the court fixed Wednesday for delivering order over the issue.