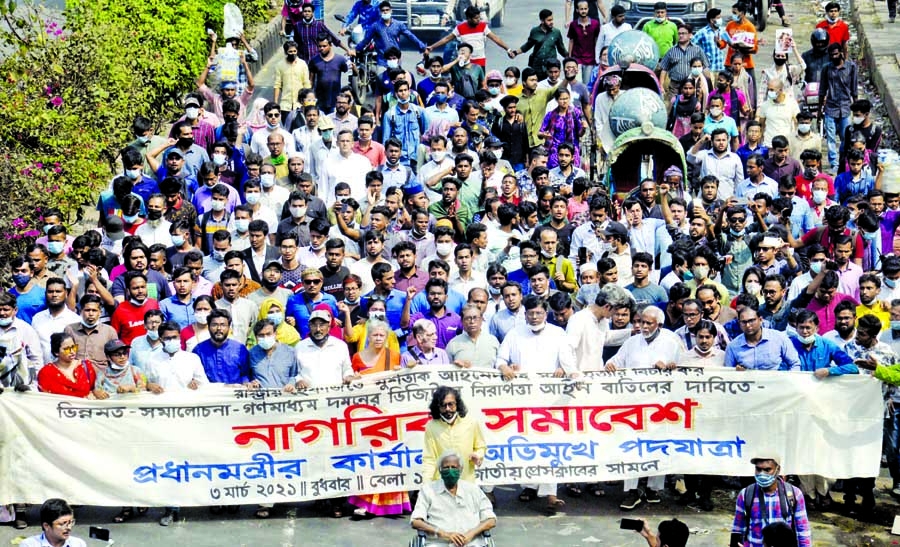 Police foil a protest rally near Hotel Intercontinental in the capital when it was proceeding forward towards the Prime Minister\'s Office demanding repeal of Digital Security Act.

Police obstructed some eminent citizens near InterContinental Hotel in the city's Shahbagh area when they brought out a procession demanding justice for writer Mushtaq Ahmed as he died in police custody, and repealing of the Digital Security Act (DSA).
The eminent citizens under the banner of 'Nagarik Somabesh' gathered in front of the Jatiya Press Club around 11 am to start their march towards the Prime Minister's Office.
As they tried to move towards the PMO, police obstructed them in front of the Hotel Intercontinental by putting up barricades. Then the protesters held a rally over there.
Gonoshasthaya Kendra founder Dr Zafrullah Chowdhury, Nagorik Oikya convener Mahmudur Rahman Manna, Secretary of Sushashoner Jonno Nagorik Badiul Alam Majumdar, prominent photographer Shahidul Alam were, among others, present at the rally.
Earlier left-leaning student bodies, including Bangladesh Chhatra Front, Chhatra Federation and Bangladesh Students Rights Protection Council, on Friday and Saturday staged demonstrations on the Dhaka University campus, protesting the death of writer Mushtaq.
Mushtaq reportedly suffered a heart attack inside his cell at Kashimpur Jain on Thursday evening.
"He was rushed to Shaheed Tajuddin Medical College Hospital where he was declared Â Â Â  brought dead," Senior Jail Superintendent Md Gias Uddin said.
An unnatural death case was filed with the Gazipur Metropolitan Police's Sadar Police Station in connection with Mushtaq's custodial death.
The 53-year-old writer, who published the book "Kumir Chaasher Diary" under the pen name Michael Kumir Thakur, was picked up by Rapid Action Battalion (RAB) personnel from his Lalmatia home on May 2, allegedly for posts over the handling of the Covid-19 pandemic.
Calls for Mushtaq's release were widespread and sustained throughout his time in prison. Soon after his arrest, more than 300 dignitaries in Bangladesh issued a joint statement demanding his release, including cartoonist Ahmed Kishore.
However, his bail applications were turned down on at least four occasions.