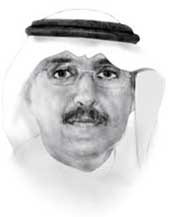 Dr. Abdel Aziz Aluwaisheg :
In his speech before the Munich Security Forum last month, US President Joe Biden sought to reassure European allies about the strength of the transatlantic alliance. Many times in his speech, he asserted "shared values" and "shared democratic values" between the US and Europe. The president made no mention of universal values and unwittingly undermined his call for a universally accepted rules-based international system. By appealing to transatlantic values, the president risked appearing to advocate "Western values" at the exclusion of all others - the remaining 85 percent of humanity - and thus invite counterclaims of relative morality.
The "Asian values" concept is the chief rival for Western values. It was made popular by leaders in China, Malaysia and Singapore, among others, who employed it for political mobilization against calls for representative government and human rights.
Proponents of Asian values say they are more appropriate for the region than Western ideas of government, which focus on individual freedoms. Lee Kuan Yew, the founder of modern Singapore, once said: "With few exceptions, democracy has not brought good government to new developing countriesâ¦ What Asians value may not necessarily be what Americans or Europeans value. Westerners value the freedoms and liberties of the individual. As an Asian of Chinese cultural background, my values are for a government which is honest, effective and efficient."
There have been various attempts to define Asian values to include loyalty to the family, corporation, and country, forgoing personal freedom for the sake of social stability and prosperity, the pursuit of academic and technological excellence, thrift, and a strong work ethic. The Bangkok Declaration of 1993 added respect for sovereignty, self-determination and non-interference in civil and political rights, social harmony, prosperity, communal well-being, and loyalty and respect toward figures of authority.
The Indian-American economist and philosopher Amartya Sen has argued that the concept of Asian values is used to cover up authoritarianism. In his essay "Human Rights and Asian Values," Sen said that those virtues were not especially Asian, rejecting the "grand dichotomy" of Asia against the West. He correctly stated that ideas of political and personal liberty and rights are recent concepts and could not be regarded as "traditional" commitments of only Western cultures. He dismissed as shallow "over-simple generalizations" ideas contrasting "Western civilization," "Asian values," "African cultures," and so on.
Australian scholar Peter Harrison's original research showed that the expression "Western values" did not appear in English until the middle of the 20th century, following the Second World War - a conflict that shattered any complacency about the moral superiority of Europe. Since the 1950s, the frequency of use of the phrase has been rising dramatically. Harrison adds: "This late invention of Western values nicely illustrates the general paradox - the concept of a long tradition that arguably was never really a part of that tradition's own self-understanding."
"American exceptionalism" is another self-absorbed theory that states that the US is inherently different from other nations. A somewhat vulgar version of "West versus East" was articulated by Samuel Huntington in his "Clash of Civilizations" book, whereby "Western civilization" is imperiled by other cultures with inimical values. This external threat, he argued, is actuated by immigrants from inferior and hostile cultures.
In his later book "Who Are We?" Huntington focused on the danger from within, i.e., Western liberals who do not share his views. He defines Western values as "liberty, equality, individualism, representative government, and private property." Serious scholars have readily dismissed Huntington's ideas as simplistic and riddled with gross generalizations and equally questionable assertions, as he disregarded masses of social science research and replaced them with decidedly subjective analysis. He has been especially taken to task for demonizing Muslim and Latin American immigrants to the US. However, right-wing politicians have weaponized both the Western values concept and Huntington's pseudo-intellectual discourse on the inevitability of a clash of civilizations, just as the discourse of Asian values was used in the East.
The common thread in Asian values and Western values theses is the denial that human rights are universal, but are instead Western concepts. They also have in common a belief in a grand dichotomy between East and West, however defined.
There is no question that communities, cultures, countries or even towns have some distinguishing characteristics and norms, which could be a positive thing. However, the international rules-based system of human rights is a body of codified laws and institutions that is sometimes influenced by those norms, but only at the margins.
There is a well-documented history of the modern system of human rights, which shows that it was a collective project from East and West. Propelled by the horrors of two world wars and countless regional conflicts, survivors from all over the world met and put together the foundations for the system, including the Universal Declaration of Human Rights and the UN Charter. The founders knew that no continent or culture had a monopoly over evil; atrocities were committed everywhere during those wars. Equally, no culture had a monopoly over good; every community had its ideas about how human beings should behave.
The founders scoured every culture to come up with norms that could be universally accepted. Fortunately, they found elements in every culture in support of the new system. The charter and declaration have been accepted as major parts of a universal system of beliefs about the dignity of human beings. Scores of legal instruments were also approved by the same mix of cultures and now constitute the body of the human rights system, which is not Asian, African, European or American, but all of these. Any discussions should be based on those documents and institutions - how to fine tune, amend, reform or build on them. Mining history to find out who came up with an idea first is an interesting exercise, but it should not affect how the system operates.

(Dr. Abdel Aziz Aluwaisheg is the GCC assistant secretary-general for political affairs and negotiation, and a columnist for Arab News). Twitter: @abuhamad1