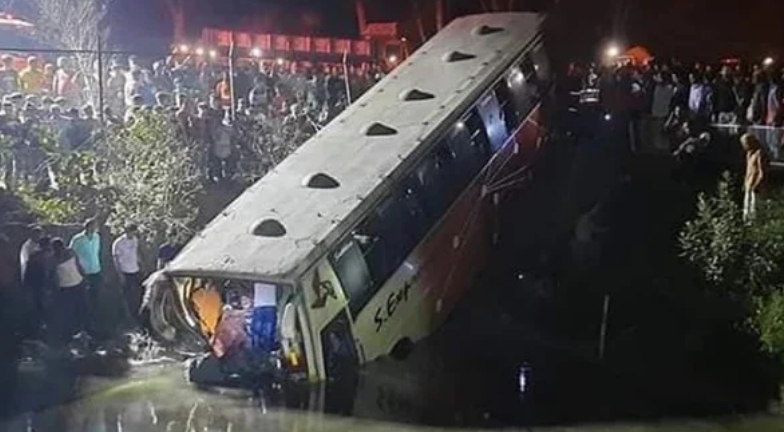 Nagarkanda municipality mayor Nimai Chandra Sarkar was seriously injured while his wife, son and a party colleague were killed in a road accident on the Dhaka-Khulna highway on Wednesday night, police said.
The Mayor was airlifted to a military hospital in Dhaka in the early hours of Thursday after his condition worsened at Faridpur Medical College and Hospital, where he was initially rushed to. Nine others were also injured in the crash.
The accident occurred on the highway at Kaler intersection in Nagarkanda upazila around 9.30 pm when a state-run passenger bus collided with a microbus carrying the 50-year-old mayor, his family and some party colleagues home from a programme.
OC Omar Faruk of Nagarkanda Police Station said Sanchita Sarkar, the 38-year-old wife of the mayor, their son Gourab Sarkar, 23, and Kamal Matubbar, 38, joint general secretary of Nagarkanda municipality unit Jubo League, died on the spot in the impact of the crash.
While the Mayor was taken to Faridpur Medical College and Hospital, the others were admitted to a local hospital.
"The Mayor was airlifted to Dhaka from Faridpur by an air ambulance of Bangladesh Air Force (BAF) around 1.10 am as his condition continued to be critical," said Md Shahidul Islam, inspector (operations) of Faridpur Kotwali Police Station.
He is being treated at Combined Military Hospital in Dhaka, the officer said.
The Mayor and his family met the tragedy on their way back home from a programme in Bhanga upazila.
"A probe has been ordered into the accident," the police officer said.