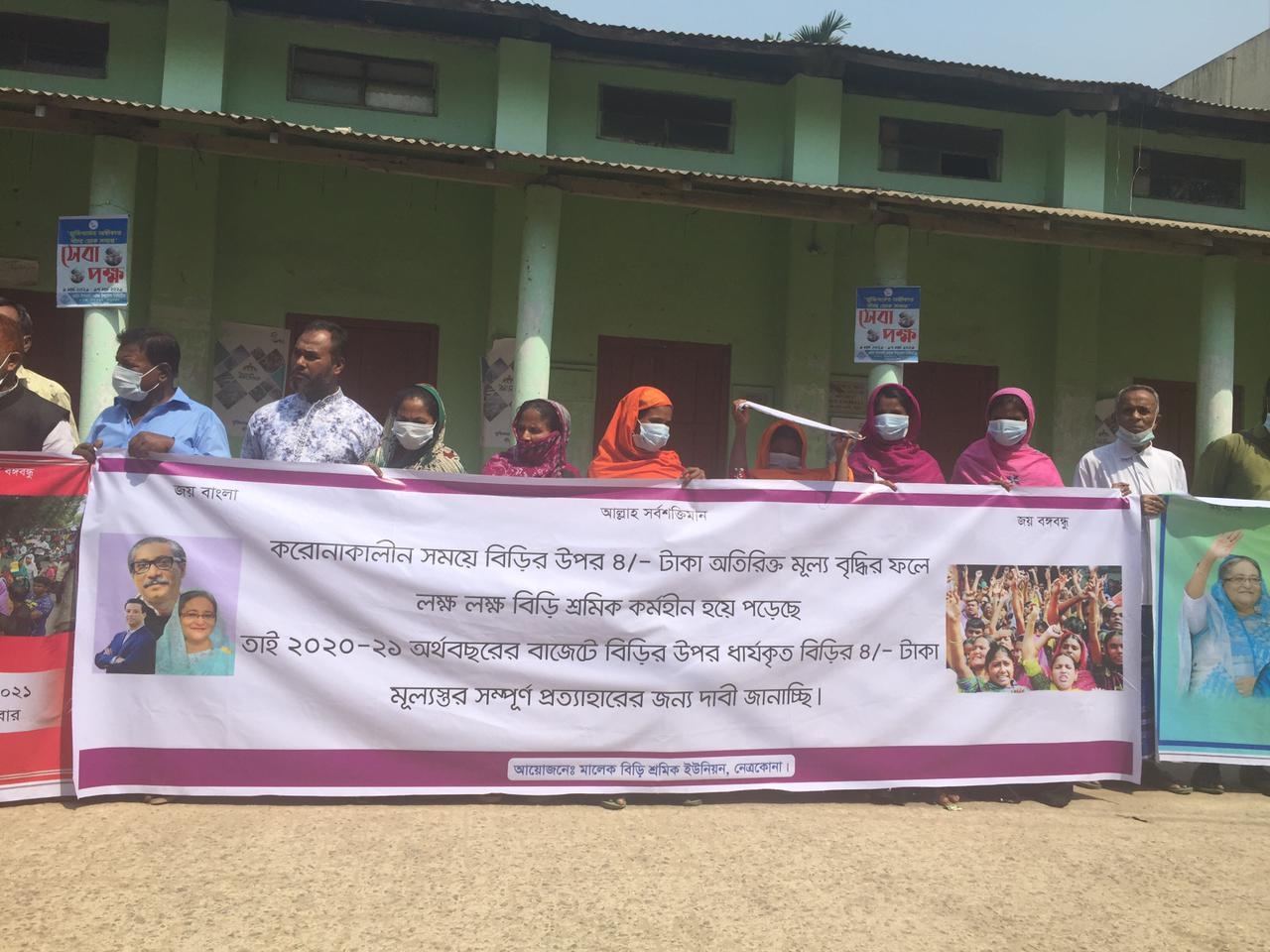 Staff Reporter: Hardworking bidi workers in different parts of the country at different times have continued their human chain to fulfill their demands one by one. Thousands of male and female bidi workers staged a human chain in front of Netrkona press club in Netrokona district town on Thursday morning, ignoring the scorching sun.
The workers mentioned 5 demands including withdrawal of additional price of Tk 4 imposed on bidi in the current budget, provision of work 6 days a week, withdrawal of 10 per cent advance income tax on bidi, keeping bidi as cottage industry.
Netrokona District Bidi Workers Union arranged the humanchain that the end of the humanchain
the labour leaders handed over the memorandum to the chairman of the National Board of Revenue Board through the Netrokona Divisional Revenue Officer.
Md. Abdul Gafur, Netrokona District Bidi Sramik Union president also the organising secretary of Bangladesh Bidi Sramik Federation over the humanchain programme.
General secretary of the Federation Abdur Rahman, joint-secretary Md. Harik Hossain, Nazim Uddin, Anwar Khan, Labour League leader Ashraf Ali Khan and others spoke on the occasion.
Referring to their just demands, the workers said, "We have been making repeated demands to the human chain in different places but it is not being taken into account." So we are being forced to do what we have to do. They reiterated their demand to withdraw the four taka extra price imposed on bidis in the current budget, provision for working days a week, withdrawal of 10 per cent advance income tax on bidi and keeping bidi as cottage industries.
Seeking the Prime Minister's attention to protect the work of the helpless workers, the speakers said that the helpless, widows, abandoned husbands, the physically challenged and the people of the char areas make a living by working in the bidi factory. Bangabandhu Sheikh Mujibur Rahman declared bidi free of duty in the interest of employment of hardworking people. Prime Minister Sheikh Hasina in her budget speech directed to reduce taxes on bidis. But the conspiracy of the multinational cigarette companies has imposed an exorbitant tax burden on the industry; unable to bear it, the bidi owners are being forced to close the factory. As a result, the workers are living a dehumanized life.
The speakers also said that in the budget for the fiscal year 2020-2021, the price of low quality cigarettes has been increased by only Tk 2 while the price of bidi has been increased by Tk 4 per packet ? andthere has been no increase in mid-range cigarettes. So isn't it discrimination?
Despite being a homogenous product, the price of bidi has been increased in an extremely discriminatory manner. As a result of excessive price hike, the market for fake bidis has gone up. As a result, the government is being deprived of huge amount of revenue. They have sought the attention of the Prime Minister to protect the work of the helpless workers.