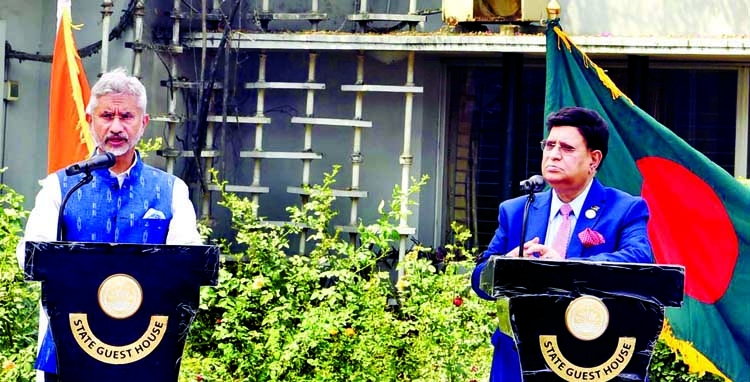 News DeskÂ  :
Bangladesh and India on Thursday highlighted their shared objective with an approach "no crime, no death" to end killing along the border, noting that every death is regrettable.
"Our shared objective should be no crime, no death (along the border). I'm sure if we can get it right - no crime no death - we can together address this problem effectively," Indian External Affairs Minister Dr S Jaishankar told reporters at state guesthouse Padma, reports UNB.
He said the two countries know the problem and the problem is because of crimes and mentioned that the two countries discussed the issue at the meeting.
On the water sharing issue, the Indian Minister said all know the position of India and that position has not changed.
The two sides discussed ways to take forward the relations as the two countries are set to celebrate the 50 years of Bangladesh independence together this month.
Foreign Minister Dr AK Abdul Momen and Indian External Affairs Minister Dr S Jaishankar led their respective sides at a bilateral meeting held at state guesthouse Padma, taking stock of the progress of their relations.
The Indian minister arrived by a special aircraft in the morning. Foreign Minister Dr Momen welcomed him at Bangabandhu Air Base.
Jaishankar is here at the invitation of Bangladesh Foreign Minister Dr AK Abdul Momen, aiming to deepen the ties between the two countries.
During the visit, the External Affairs Minister will also meet Prime Minister Sheikh Hasina in the afternoon.
The visit follows on the PM-level Virtual Summit held between two countries on December 17, 2020.
Bangladesh looks forward to Indian Prime Minister Narendra Modi's visit this month to take forward the bilateral relations with some deliverables, said State Minister for Foreign Affairs M Shahriar Alam on Tuesday.Modi's planned visit to Bangladesh on March 26-27 will be his first trip abroad in more than a year, mainly because of the Covid-19 pandemic.
Bangladesh is set to celebrate the 50th anniversary of independence and 50 years of Bangladesh-India diplomatic relations this year.
The State Minister highlighted the deepness of the relations between Bangladesh and India, and mentioned that Bangladesh will host some important events from March 17-26.
A passenger train is likely to be made operational between Dhaka and New Jalpaiguri of India on March 26 as part of the celebrations of the Golden Jubilee of Bangladesh's independence.
Prime Minister Sheikh Hasina and her Indian counterpart Narendra Modi are expected to flag off the train service.
The two leaders held a Summit in virtual format on December 17 last year and had comprehensive discussions on all aspects of bilateral relations, and exchanged views on regional and international issues.
Prime Minister Sheikh Hasina thanked her Indian counterpart Narendra Modi for accepting her invitation to visit Bangladesh in person in March 2021 to join the celebrations on the occasion of the 50th anniversary of Bangladesh's Independence and 50 years of Bangladesh-India diplomatic relations.