TV serial Aamma to be finished despite getting popularity 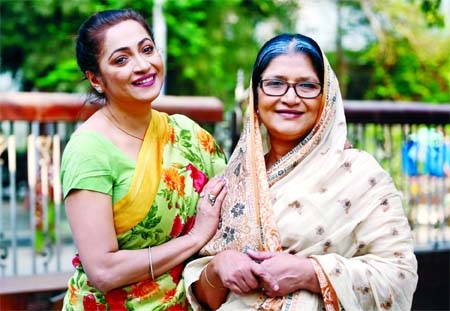 Sheikh Arif Bulbon :
After getting popularity drama serial Aamma is going to finish its telecasting on Channel i soon. Noted actress Shilpi Sarkar Apu is playing the title role in the serial directed by Abu Hayat Mahmud. Masum Shahriar wrote story of the serial. Shilpi Sarkar Apu is getting huge
appreciation to play the title role in the serial. Popular TV actress, model and director
Tania Ahmed is acting in the role of elder daughter of Apu in the serial.
While talking about acting in the serial Apu said, âWhen I first informed that the serial is going to end its telecasting I felt really bad. In fact, in the serial, who acted in roles of my children, everybody has become my real children. I will really miss them later. Story of the serial was so realistic that we did not use glycerin while taking part in shooting of the serial. In emotional scene, crying came into our eyes automatically. I give thanks to playwright and director of the serial. I also give thanks to
the full unit of the serial. At the last stage of shooting, I remembered my mother in the shooting spot. Few days ago, I lost my mother.â Tania Ahmed said, âBefore standing in front of the camera we had to read the script for taking part in the rehearsal. It was seen that crying came out into our eyes during taking part in the rehearsal in the shooting spot. We blended with our roles in depth that we couldn't understand we are taking part in shooting for a serial. I give thanks to Masum Shahriar for writing such a nice story for the serial. I give also thanks to director Abu Hayat Mahmud for getting the opportunity though a nice journey of the serial. The serial is going to end - it feels bad but also feels happy because despite getting popularity the serial is going to end.â
Besides Shilpi Sarkar Apu and Tania Ahmed, Salauddin Lavlu, Anisur Rahman Milon, Faruk Ahmed, Shahed Ali, Nazia Haque Orsha, Mishu Sabbir, Airin, among others, are acting in
different roles in the serial Aamma.