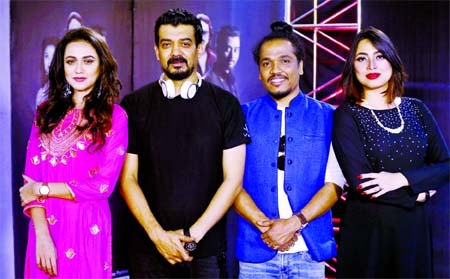 Entertainment Report :
Under the initiative taken by the private TV channel, NTV different talented persons are being searched across the country
specially in the divisional cities. Produced and directed by Wahidul Islam Shuvro, primary selection round of GPH Ishpat Anonnyo Protibha has been
completed. Three judges - actress Shanarei Devi Shanu, film actress and model Airin Sultana and singer Pulak Adhikary found 142 talented persons from across the country through the selection round of Dhaka. Basically their sharp hunting 142 talent have been found.
While talking about the selection round director of the show Wahidul Islam Shuvro said, â142 talents have been found across the country by the three judges. Semifinal round is scheduled to be held on March 25 and 26, while on March 29, we will know who will be the winner. We are trying our level best as any real talent cannot be eliminated. For this reason, we gave full freedom to three judges at primary round as they could give their judgments properly. I strongly believe these talents, who have been selected across the country, will contribute themselves in future. We will take more 8 talents, who were in waiting list, as 150 can contest in the quarter final round where 40 talents will be selected and out of them, 20 will contest in the semifinal round. Then finally 10 will get the opportunity to contest in the grand finale. Each episode of the reality show will go on air on NTV after Eid-ul-Fitr.â
Airin said, âIt was really tough job for us to hunt real talents in divisional cities of the country. But it is a successful matter that we have brought them at this stage of the reality show.â
Shanu shared her feelings by this way, âWe worked as a team for the country and also for the countryâs people. Director Shuvro Bhai gave us full freedom in case of giving our judgment in the selection round. For this reason, we found 142 talents. They will become really successful who can provide their level best talents finally. These 142 are really lucky and obviously are real talents.âÂ