Mamata to contest from Nandigram 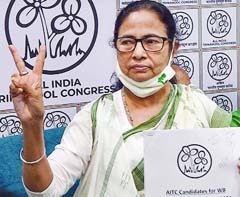 PTI :
West Bengal Chief Minister Mamata Banerjee on Friday announced that she will contest the upcoming Assembly elections from Nandigram, and would vacate her own seat of Bhowanipore in Kolkata, NDTV reported.
Nandigram is the stronghold of Suvendu Adhikari, one of the top leaders of the Trinamool Congress who switched sides to join the Bharatiya Janata Party, ahead of the eight-phased election.
Trinamool Congress leader Sovandeb Chattopadhyay will contest in Banerjee's place from Bhowanipore in Kolkata. The chief minister has contested from the Bhowanipore seat for the last decade.
"I am going to Nandigram on March 9," Banerjee told reporters, according to ANI. "On March 10, I will file the nomination at Haldia."