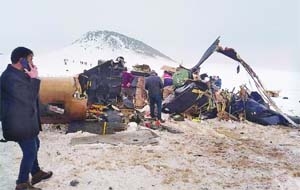 Rescue workers, soldiers and civilians walk around the wreckage of a military helicopter that crashed near the Turkish eastern city of Bitlis.

AFP :
Eleven Turkish soldiers were killed when their military helicopter crashed in heavy weather in the country's restive southeast on Thursday, the defence ministry said.
Television images from the crash site showed the ground blanketed in snow and visibility hampered by thick clouds in the mountainous region.
Ruling AKP party lawmaker Tolga Agar, who sits on parliament's defence committee, tweeted that Lieutenant General Osman Erbas was among the dead.
Erbas is officially listed as the head of the Turkish army's 8th Corps.
Turkish President Recep Tayyip Erdogan offered his condolences to Erbas' son, Yigitalp, and his family in a telephone call, the presidency said in a statement.
The defence ministry said contact with the helicopter was lost in the Bitlis province 30 minutes after it had taken off.
It initially said nine soldiers were killed and four wounded before revising the death toll to 11 late Thursday.
"I pray for Allah's mercy for our nine martyrs... Our pain is great," Erdogan's spokesman Ibrahim Kalin tweeted earlier.
Turkish media reports said Defence Minister Hulusi Akar, Interior Minister Suleyman Soylu and senior military figures were travelling to the site of the crash.
The European Union and the United States immediately offered their condolences to the Nato ally.
"We share the deep sorrow of Turkey for the loss of nine military personnel in Bitlis," said the EU's Turkey ambassador Nikolaus Meyer-Landrut, whose bloc will review its relations with Ankara at a summit in Brussels later this month.
"Our thoughts are with the families of all those affected, and we wish a rapid recovery to the injured," the US embassy said in a tweet.
A Turkish diplomatic source said Nato Secretary General Jens Stoltenberg offered his condolences in a telephone call with Foreign Minister Mevlut Cavusoglu, and added the alliance "stood in solidarity with Turkey."
The Turkish defence ministry said the accident involved a Cougar helicopter but provided no details about the model.
The Cougar family of multi-purpose helicopters was developed by France and are now produced by Airbus.
The accident occurred in a region where Turkish forces regularly conduct military operations against outlawed Kurdish militias.
In 2017, a military helicopter crashed in the south-eastern Sirnak province near Turkey's border with Syria and Iraq, killing 13 soldiers.