200 Mâsingh canals on verge of extinction 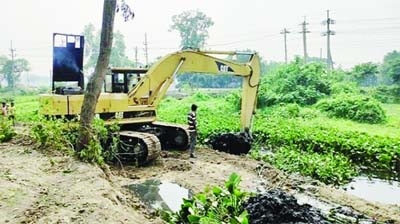 Excavation work on the city\'s Aqua Canal is underway.

Our Correspondent :
Even 10 years ago, the water of all the canals in Mymensingh was free from pollution. The water of these canals was used for irrigating arable lands. However, the canals have been in a crisis of existence for a few years. When walking along the side of the canals, anyone will stop breathing due to the stench of rotten water. Besides, some canals have been erased due to illegal occupants.
According to the District Water Development Board, the wetland area of the Aqua Canal in the city was 13.8589 acres with an average depth of 8 feet. There are four dilapidated culverts. Makarjani Canal, located in the heart of the city, has an area of 0.16401 acres and an average depth of 6 feet. Maskanda Canal has an area of 1.9320 acres and an average depth of 7 feet.
Although this information is recorded on paper, the real picture can be understood while visiting these canals on spot.
Garbage is being dumped in this natural reservoir. One after another possession is going on. After occupying these places, shops and multi-storied buildings have been constructed. As the canal was filled, waterlogging occurred in different parts of the city due to light rains. As a result, the city dwellers are suffering.
There are about 200 canals in the district as per the District Water Development Board. Most of these canals are losing their existence day by day due to illegal occupation, pollution and filling not only in the city corporation area but also in other areas.
"Once various species of fish used to find in this canal. Besides bathing in clear turbulent water, cooking and washing of utensils were also done. That day is now only a past," said Fazul Haque, an elderly from the southern part of the city, describing the poor condition of the Aqua Canal.
Osman Ali, a resident of the Aqua Barera area said, "Even though shops, houses were built by occupying the canal, no one said anything. That is why it will extinct at some point."
He also blamed the lack of surveillance of the concerned authorities for the pollution. Â
The situation is similar in Maskanda, Makarjani, Bagabari, Gohailkandi, Sehra, Katakhali and Chhatrapur canals of the city.
Last year, a committee was formed at the joint initiative of Mymensingh City Corporation and the Deputy Commissioner to evict the illegal occupants, however, no benefits did not get. Â
The convener of the committee, AKM Ghalib Khan, deputy director of local government, said no action could be taken due to the epidemic after the formation of a committee to restore and repair the city's canals. However, the canals have been inspected recently. The report will be submitted soon.
Mymensingh City Mayor Ekramul Haque Titu said, "Excavation work on the city's Aqua Canal was already underway. A master plan is also being prepared for the renovation of all the canals in the city. The matter has been contracted with a consultancy firm. Work will start very soon."