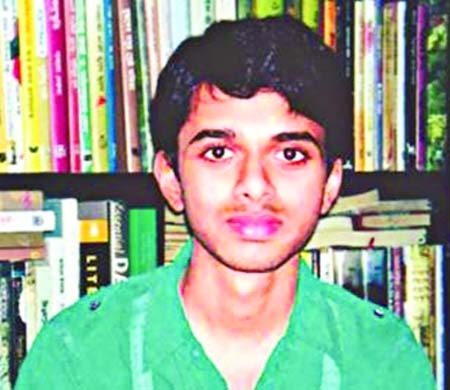 Staff Reporter :
Justice seems like a never-ending wait for the family of Tanvir Mohammad Twaki who was abducted and brutally killed in Narayanganj, yet there has hardly been any progress in the investigation of the case.
Seventeen-year-old Twaki went missing from in front of his house in Narayanganj on March 6,
Â 2013. His father Rafiur Rabbi filed a general diary with Sadar police station on the same day and sent a letter to RAB 11 as well.
Two days later, Twaki's dead body was found on the bank of the Shitalakkhya River. His father filed a case against unnamed accused who were angry with him for his social and cultural activities.
After filing the case, eight investigators have been investigated it and eight years have been elapsed by this time.
The Rapid Action Battalion (RAB), who is conducting the investigation, has not even submitted the chargesheet to the court. The unnatural delay in the trial proceedings has left Twaki's family and friends frustrated.
On Monday, a court in Narayanganj rejected a petition seeking its order for the submission of the charge sheet and arrest of the accused. The court also set April 20 for the next hearing in the case, court officials said.
Advocate Ziaul Islam Kajol, lawyer for the plaintiff, told media that they have been submitting such petitions for several years, but in vain.
"We demand that the government make sure the chargesheet in the case is submitted without any delay, and the accused are apprehended as well," he added.
When asked, RAB Legal and Media Wing Director Lt Col Ashik Billah said eight investigating officers have investigated the case, so far.
"RAB is putting a lot of importance on investigating the case, considering its sensitivity," he added.
On March 18, 2013, Rafiur Rabbi wrote a letter to the then-superintendent of police in Narayanganj and accused Narayanganj 4 MP Shamim Osman, his son Ayon Osman, Azmeri Osman, son of former Narayanganj 5 MP late Nasim Osman, and others of being involved in the murder.
Police arrested Yusuf Hossain alias Liton, and Rifat Bin Osman in this regard. The case was handed over to RAB in June after the victim's father filed a petition with the High Court over the police's failure to make any further progress.
Subsequently, RAB personnel arrested Saleh Mohammad alias Simanta, Sultan Shawkat alias Bhromor, and Tayeb Uddin Ahmed in connection with the murder.
Later on, Liton and Bhromor gave confessional statements before courts, revealing the identities of 11 people involved in the murder.
In his statement, Bhromor said Twaki was murdered at the office of Azmeri Osman.
Azmeri led the murder, he said, adding that Twaki's body was packed in a gunnysack and loaded in Azmeri's car.
The body was taken to Charargop and dumped in the Shitalakshya River, according to the statement.
However, Bhromor later filed a petition to withdraw his confessional statement.
Bloodstained trousers were recovered from Azmeri Osman's office in a RAB raid on August 7, 2013.
On March 5, 2014, then-Additional Director General of RAB Col Ziaul Ahsan revealed details of the murder before the media and said they would submit a charge sheet very soon.
The suspects named by RAB were Azmeri Osman, Rajib, Kalam Shikdar, Mamun, Opu, Kajal, Shipon, Jamshed Khokon, Liton, Bhromor, and Tayeb.
However, no suspects are in police custody now.
Twaki's father Rafiur Rabbi said RAB held a press conference one year after the murder and revealed the identities of the perpetrators. However, the charge sheet is yet to be placed before the court.
Santrash Nirmul Twaki Manch Member Secretary Halim Azad said the murder is not being tried for mysterious reasons. "Still, we are hopeful of getting justice."
Advocate Mahbubur Rahman Masum, Dhaka divisional chief of the National Human Rights Commission, said: "We will not leave the streets until the trial of the Twaki murder is held. Not only for Twaki, we want justice for all murders."
In February this year, 26 noted personalities sought the intervention of Prime Minister Sheikh Hasina to start the trial in the murder case.