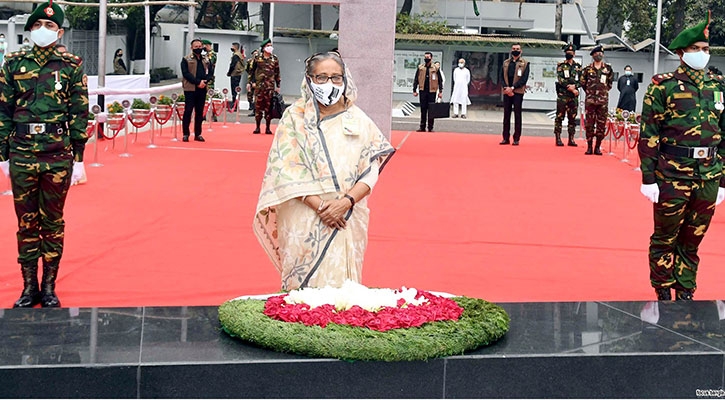 Prime Minister Sheikh Hasina has paid homage to Bangabandhu Sheikh Mujibur Rahman to commemorate the Father of the Nation's historic March 7 speech that outlined the path to independence 50 years ago.

Hasina placed a wreath in front of her father's portrait at Bangabandhu Bhaban at 7 am Sunday, according to her Deputy Press Secretary KM Shakhawat Moon.

She subsequently spent a few moments in solemn silence alongside her sister Sheikh Rehana.

However, Awami League leaders and workers did not accompany the prime minister this year due to strict health regulations in place amid the coronavirus pandemic.

Later, the ruling party's General Secretary Obaidul Quader led senior leaders in paying tribute to the Father of the Nation.

The day has come with a different fervour amid Bangabandhuâs birth centenary celebrations. The country is also set to celebrate the golden jubilee of independence.

Programmes will be held for 10 days from Mar 17 to Mar 26 to celebrate the occasions simultaneously. The celebrations have so far been limited mostly to virtual events amid the coronavirus pandemic.