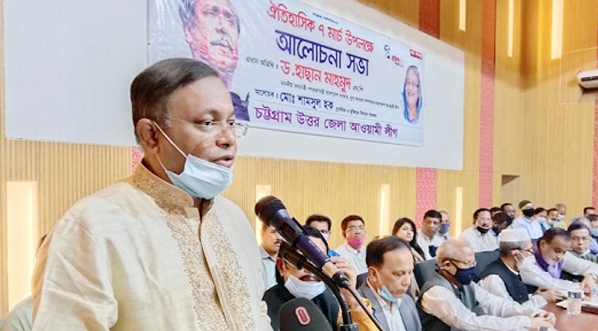 Chattogram Bureau :
Coronavirus vaccination program has started in the port cityÂ  throughÂ  vaccinationÂ  toÂ  the Deputy Education Minister Mahibul Hasan Chowdhury Nawfel MPÂ  at ChattogramÂ  Medical College (CMCH HospitalÂ  Saturday. Later, Awami League presidium member Engineer Mosharraf Hossain and his wife Ayesha Sultana, ChattogramÂ  Medical College Hospital Director Brigadier General SM Humayun Kabir, Divisional Health Director Hasan Shahriar Kabir, Civil Surgeon Sheikh Fazle Rabbi, Public Health Specialist and ChattogramÂ  Field Hospital Founder Bidyut BaruahÂ  tookÂ  the vaccine.
After the official inauguration of the Health Minister's Vaccination Program in Dhaka, vaccination started in the port city. ChattogramÂ Â  Medical Deputy Director Aftabul Islam said vaccination has started in four booths after the official inauguration.
A total of 100 people, including doctors, politicians, administration officials and journalists, will be vaccinated on the first day at the hospital. Four booths have been set up on the fourth floor of the hospital next to the ICU.
Two of these booths are for women. For this purpose, observation rooms and teams led by specialist doctors have been formed in the hospital. Vaccination will also start at ChattogramÂ  General Hospital at noon. It will be officially inaugurated by Deputy Education Minister.
20 people will be vaccinated on the first day at the General Hospital. At least 10 people are to be vaccinated on the first day in 15 upazilas ofÂ  the district. Four lakh 56 thousand doses of vaccine have arrived in Chattogram.
Of which one lakh 54 thousand doses will be given in the cityÂ  and the rest of the vaccines have been sent to the upazilas, civil surgeon office sources said.