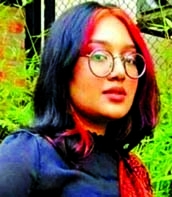 Staff Reporter :
Police have sought a five-day remand for Amir Hamza Adnan, who was arrested in connection with the death of Tajrian Mostafa Moumita, 19 - a student of Asia Pacific University of Technology & Innovation (APU) - who fell from the roof of a building in the capital's Kalabagan.
The Dhaka Chief Metropolitan Magistrate's Court shown-arrest him in the case on Thursday. At the same time, the court fixed Monday for the remand hearing.
This information has been obtained from the concerned court sources on Friday.
Accused Amir Hamza Adnan was produced before the court on the day. The court then shown-arrest him in the case. At that time, the investigating officer of the case appealed for a five-day remand for questioning. The court then fixed Monday for a hearing on the matter.
Meanwhile, the court has set April 12 to submit a probe report against five people, including the flat owner's son Farjad Ahmed Faijar. On March 2, Dhaka Metropolitan Magistrate Abu Sufian Mohammad Noman's court accepted the statement of the case and fixed the date.
Earlier, the deceased's father Md Kamal Mostafa Khan Shamim filed a case with the Kalabagan police station on Monday night, three days after the death.
According to the case statement, the girl lived with her family for a long time on the fourth floor of the house in Kalabagan. Moumita went to the rooftop around 4:30 pm on Friday. Her father had texted her to return home quickly. Later around 6:00 pm, her body was found in front of the building. She was buried at Rayerbazar graveyard in the capital on Saturday night after autopsy.
The family alleged that Faijar used to stalk Moumita. In the case statement, the complainant alleged his daughter was pushed off from the rooftop of the seven-storey building.
Moumita's father Kamal Mostafa suspected that Faijar and Adnan along with three other youths - Tanvir, Trinoy and Oparijita - were behind the murder.