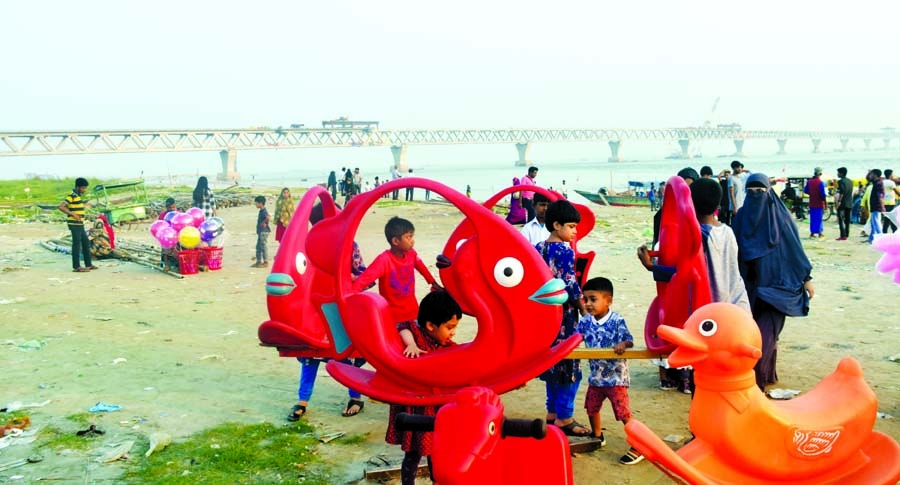 People throng the bank of Padma River at Mawa Ghat in Munshiganj in every weekend, as it has become a new hub of domestic tourism due to the construction of Padma Bridge. This snap taken on Saturday shows children are playing with toys on the river bank

Staff Reporter :
The people and children used to go to Mawa Ghat area to buy the Hilsa fish. But after the Padma Bridge construction, the number of visitors has been increasing day by day to have a glimpse of the bridge.
The Padma Bridge is being recognized as the new hub of tourist attraction and tourism.
Apart from advantages of industry, trade, housing, fisheries, agro-economy, the chars (shoals) that have sprung up on the banks of the Padma have ample opportunity to become planned tourist spots like the Maldives.
Apart from that, there is a possibility of hotels, motels, parks and recreation centers being built on both sides of the river.
Some resident of a neighbouring village of Padma said that the site virtually appeared as a tourist centre with people from different areas coming here to enjoy the beauty of nature as well to witness the bridge building process.
A fourth grade student Aniya Rahman said that she come here with her parents for enjoyment. She is very happy to come here. She plays here, rowing and lastly having Hilsa fish egg. She wants to come here again.Â  Â
Meanwhile, owner of a highway side grocery shop owner Md Chunnu Miah said that they have planned to set up modern restaurants on the south bank of the river. They expect the flourishing of the tourism industry to be generating employment opportunities and vibrate the economic activities.
Many entrepreneurs have already bought hundreds ofÂ  bighas of land. There will be big hotels and motels, parks and tourist spots. As a result, educated and semi-educated unemployed youth will be employed in our area. Our way of life will change".
On the other hand, the government is also setting up a Padma Bridge Animal Museum in the Dogachhi Service Area of the Padma Bridge. The authority concerned is very much optimistic to enrich the museum.
Initiatives have been taken to save 5,000 animal specimens in the museum. It is also expected to open to the public soon.