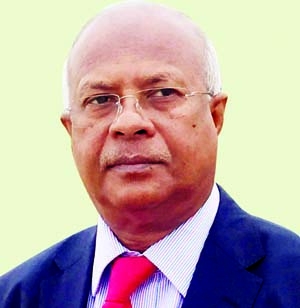 Staff Reporter :
Anti-Corruption Commission (ACC) could not meet expectations in curbing corruption, its outgoing Chairman Iqbal Mahmood said on Monday.
"I'm leaving with dissatisfaction that we could not meet public expectations," he said at a views-exchange meeting with the media organised on the eve of his farewell.
There was no pressure from the government in carrying out daily activities in the last five years, Iqbal said, adding that during his tenure, he refrained from taking any action to protect the image of the country.
The chairman said replying to a question, the ACC is more powerful now: "It is no longer a toothless tiger."
"However, a commission alone cannot carry out such vast work," he said.
But the ACC Chairman said sometimes he had to act in "self-possession." Â
"One thing I have to admit is when I felt the image of the state could be tarnished, I moved away from making decisions. The image of the state was always first to me. In those cases, I took the pressure and kept it within myself," Iqbal Mahmood told the media at the ACC headquarters in Dhaka. Â
He said, "A minister visited me only once. He is my friend. He came to have a cup of tea, not for lobbying. No minister called me with any demand. I can categorically tell you that there was no pressure on me."Â Â Â Â Â  In response to the query whether the assets of the ACC officials and employees can be disclosed, the ACC chairman said, "It requires the decision of the cabinet and higher authorities. If the ACC does it on its own, it would be a daring move."
"Suppose you have all the wealth statements of around 12 lakh public employees, what will you do then? Even India could not yield too much. You need new laws in this regard," he added.
The outgoing chairman said building the trust of the people in the commission was a major challenge, while the commission has yet to fulfill it completely.
"However, we were able to spread the message that nobody is beyond the law, and it is our satisfaction," he added.
Asked about the non-completion of investigations into 56 cases filed during the previous commission in the Basic Bank loan scam, the ACC chairman said, "This is an old question."
He said he does not think the issue harmed the ACC's reputation.Â  Â
"We could not submit a half-done chargesheet before the court. The investigation officers filed a primary report, but it did not mention where the laundered money had gone. That is why we had to delay the chargesheet submission," he added.
Iqbal Mahmood also could not specify how long the investigation would take. "More cases will be filed over the scam. That is all I can tell you," he added.
He also said there is a manpower shortage at the anti-corruption watchdog.
Former senior secretary to the Ministry of Agriculture Moinuddin Abdullah has been appointed as the new chairman of the ACC. The Cabinet Division issued a notice in this regard Wednesday.