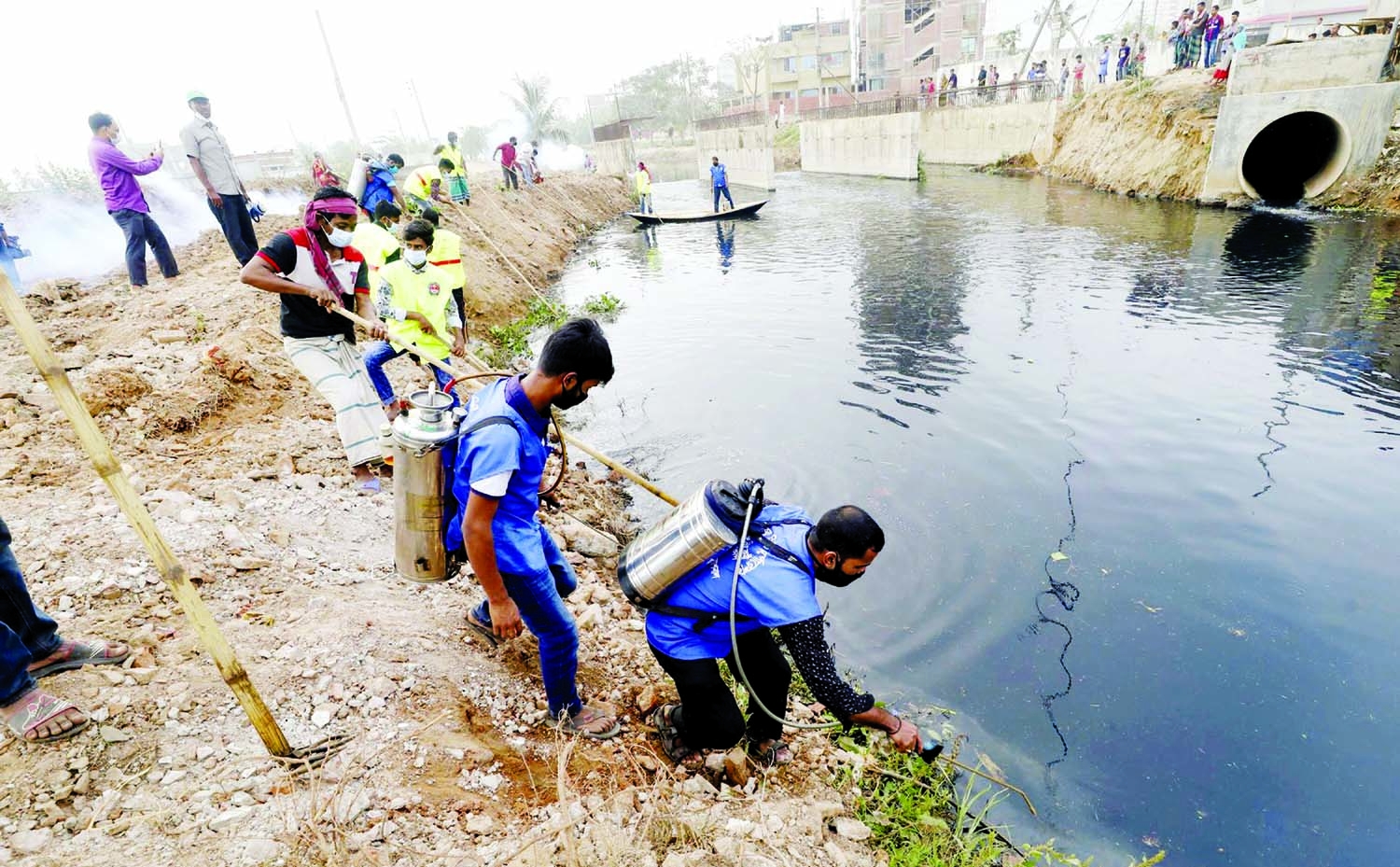 Workers of Dhaka North City Corporation spray insecticide in the capital\'s Sagufta canal on Monday as part of its mosquito control programme.

Dhaka North City Corporation (DNCC) has started an area-based crush program to kill Culex mosquitoes.
DNCC Mayor Atiqul Islam inaugurated the event on Monday morning by destroying larvae in the Sagufta canal of the capital's Mirpur.
This crush program will continue for the next 10 days by dividing 54 wards of Dhaka North City Corporation into 10 regions.
This activity will be finished by March 17 ultimately destroying the mosquito habitat in Harirampur of the city.
About 1200 mosquito extermination workers are working in this region every day to implement the goal of DNCC activity.
Besides, DNCC has also appointed 200 employees to supervise the total mosquito crush management.
During the inspection, the mayor said, "We have started the campaign today (Monday). After ten days, we will resume work after one day break. In this way I will work for ten days in ten regions. I will do better tomorrow with the lessons from today's campaign. We haven't sat idle. I want everyone's cooperation.''
Regarding keeping the canal clean, the mayor said, "Please, when we clean it, you will not throw any kind of garbage inside the canal. I am seeking the cooperation of all the inhabitant of the city to reduce the number of larvae.
While spraying mosquito repellent, the city corporation also raided the Milkvita factory and found mosquito larvae in a pile of abandoned milk packets and in a nearby pond.
At the time, the mayor said, it is unfortunate that mosquito breeding grounds have been created in a government establishment.
It is not only the breeding ground of such Culex mosquitoes, but also the milkvita polythene encourage to create breeding ground for Aedes mosquito. This organization has been warned several times. No one is above the law, whether it is government or non-government organization.
The law breakers will be brought under the law, DNCC mayor added.
Earlier, Dhaka North City Corporation (DNCC) took initiatives to use drone to kill mosquitoes. Experimental activities have been already underway.
Bangladesh experienced a massive dengue outbreak in 2019, when 101,354 people were hospitalized. According to the health authorities, the mosquito-borne disease killed 179 people that year.
However, amid the deadly coronavirus pandemic, mosquito borne like dengue can still turn out to be a great threat to the people, especially the residents of Dhaka.