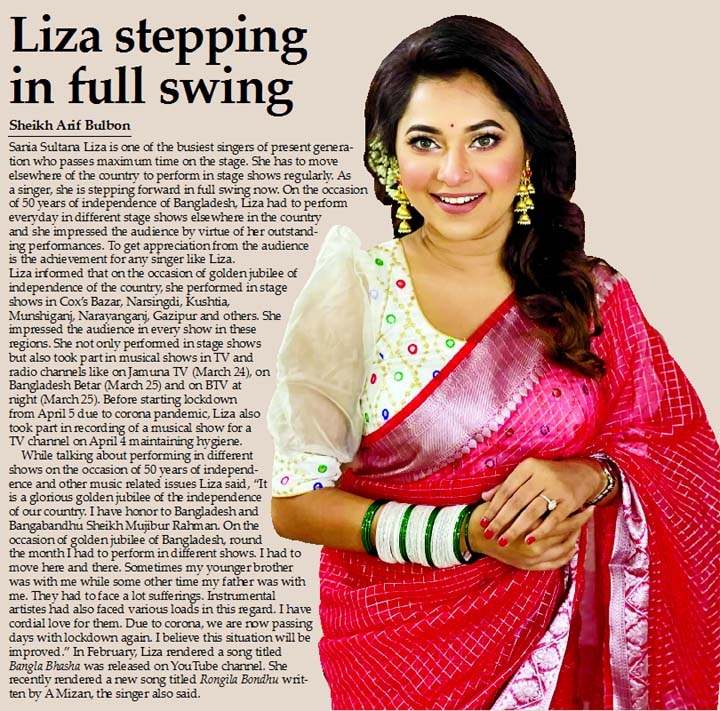 Sheikh Arif Bulbon :
Sania Sultana Liza is one of the busiest singers of present generation who passes maximum time on the stage. She has to move elsewhere of the country to perform in stage shows regularly. As
a singer, she is stepping forward in full swing now. On the occasion of 50 years of independence of Bangladesh, Liza had to perform everyday in different stage shows elsewhere in the country and she impressed the audience by virtue of her outstanding performances. To get appreciation from the audience is the achievement for any singer like Liza.
Liza informed that on the occasion of golden jubilee of independence of the country, she performed in stage shows in Coxâs Bazar, Narsingdi, Kushtia, Munshiganj, Narayanganj, Gazipur and others. She impressed the audience in every show in these regions. She not only performed in stage shows but also took part in musical shows in TV and radio channels like on Jamuna TV (March 24), on Bangladesh Betar (March 25) and on BTV at night (March 25). Before starting lockdown from April 5 due to corona pandemic, Liza also took part in recording of a musical show for a TV channel on April 4 maintaining hygiene.Â  Â
While talking about performing in different shows on the occasion of 50 years of independence and other music related issues Liza said, âIt is a glorious golden jubilee of the independence of our country. I have honor to Bangladesh and Bangabandhu Sheikh Mujibur Rahman. On the occasion of golden jubilee of Bangladesh, round the month I had to perform in different shows. I had to move here and there. Sometimes my younger brother was with me while some other time my father was with me. They had to face a lot sufferings. Instrumental artistes had also faced various loads in this regard. I have cordial love for them. Due to corona, we are now passing days with lockdown again. I believe this situation will be improved.â In February, Liza rendered a song titled Bangla Bhasha was released on YouTube channel. She recently rendered a new song titled Rongila Bondhu written by A Mizan, the singer also said.Â Â