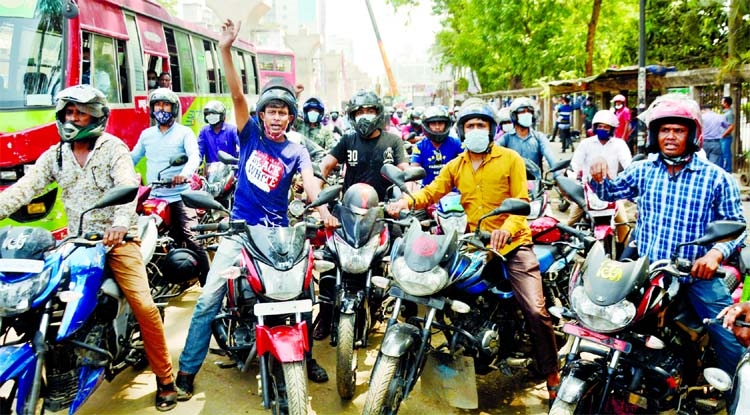 Ride sharing motor cycle bikers demonstrate on Wednesday at the Jatiya Press Club in the city demanding withdrawal of ban on their services.

News Desk :
Ridesharing motorcyclists have staged protests in parts of Dhaka against the government's halt order on their services amid a record surge in coronavirus cases.
The protesters blocked the roads at Mogbazar, Khilkhet, Mirpur and in front of the National Press Club, demanding an immediate withdrawal of the ban, reports bdnews24.com.
"The bikers have some demands and we listened to them. They didn't block the roads for a long time, but only for half an hour," said Md Munibur Rahman, additional commissioner (traffic) of police.
The bikers alleged that police harassed them by filing cases against them for ridesharing amid the virus lockdown.
In some cases, police let the riders go when they claim the other person on the bike to be a friend, said Amanullah, a ridesharing biker.
Police stopped him on his way to Narayanganj to drop a passenger, Amanullah said. After he pleaded with the police and introduced the passenger as his friend, the officer let him go, he said.
Police stopped one of his colleagues in Mirpur and filed a case against him, sparking protests in the area, he said.
The riders have staged protests in other parts of Dhaka in a similar way, Amannullah said. Ridesharing motorcyclists' earnings collapsed due to the ban.
Traffic came to a standstill at the Mogbazar intersection around 1 pm on Wednesday, when the disgruntled riders began to protest. They moved to another intersection after the police chased them. Police dispersed them again.
Bikers could not block the Dhaka roads for a long time as police drove them away, according to the traffic control room.
The authorities have sought their assistance in implementing the ban on app-based ridesharing services until Apr 14. They urged the riders to halt their services temporarily.
Ridesharing motorcyclists can resume their services as soon as the situation goes back to normal, said Munibur Rahman.
"It's a temporary inconvenience for a greater good."