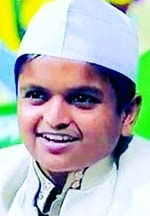 News Desk :
The Rapid Action Battalion has arrested Rofiqul Islam Madani, an Islamist orator, in Netrakona on charges of spreading hate through his speech.
The RAB arrested him on Tuesday morning for "circulating anti-state and provocative remarks", RAB spokesman Khandaker Al Moin said on Wednesday, reports bdnews24.com.
"He will face legal action," Moin said and added that further details would be revealed later. Aged 25, Madani is known as a 'child orator' for his height.
The police detained him in Dhaka's Motijheel during radical group Hifazat-e Islam's violent protests on Mar 25 against Indian Prime Minister Narendra Modi's visit to Bangladesh. He had been released later and not named in a case over the violence.