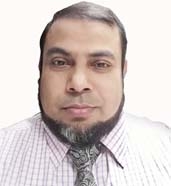 Md. Zillur Rahaman :
A few days ago, the Ever Given - a container ship about 1,312 feet long, which is longer than the Eiffel Tower tall - was lodged sideways in Egypt's Suez Canal, where it has blocked all other ships from passing. Serious efforts have been made to remove it, but they have elapsed six days to clear the route. This blockage has made a hefty financial loss not only for Egypt, but also for the global trade and economy and the true damage is being difficult to evaluate and the tailback was much-talked-about issue in the global media and a hot issue of global politics.
The Suez Canal located in Egypt, officially opened in November 1869, connects the Mediterranean Sea to the Red Sea. One of the world's most heavily used shipping lanes, the canal provides the shortest maritime route between Europe and the lands lying around the Indian and western Pacific oceans. This 120 mile (193km) stretch of water allows ships to travel between Europe and South Asia without navigating around Africa, reducing the sea voyage distance by about 4,300 miles (7,000km).
A simple answer behind the importance of the canal is its location. Strategically located, the man-made Suez directly connects the waters of Europe with the Arabian Sea, the Indian Ocean and the Asia-Pacific countries. Without this canal, the trade ships would have to traverse the entire continent of Africa-the only alternative-via the Cape of Good Hope, adding hefty costs and substantially extending their journey times.
About 80% of the volume of global trade is being transported by sea, according to a United Nations estimate. The very purpose of the canal is to shorten the transportation routes for global supply chains. It allows ships to save thousands of miles in their journeys, making it one of the most trafficked shipping lanes in the world. About 12% of global trade, around one million barrels of oil and roughly 8% of liquefied natural gas pass through the Suez canal each day. According to Moody, prior to the pandemic, trade passing through the Suez Canal contributed to 2% of Egypt's GDP and earned $5.61 billion in revenues from the Suez Canal in 2020, the canal authority said in a statement, down from $5.8 billion in 2019.
The crisis of the "Ever Given" container vessel in the Suez Canal that was solved after it had completely blocked all other shipping for six days, hasÂ  revived talk about alternatives, including Israel'sÂ  Ben Gurion canal project that would link the Red Sea to the Mediterranean. Experts say every time the vital Suez canal, which is used by some 19,000 vessels a year carrying up to 12% of global trade, is clogged for whatever reason, alternatives automatically resurface .
The Israelis are promoting their projected Ben Gurion waterway as a rival to the Suez Canal. They say that the distance between Eilat and the Mediterranean is not long, and is in fact similar to the distance of the Suez connection between the Red Sea and the Mediterranean. Tel Aviv plan is to turn this canal into a multi-faceted project, in addition to having it play a commercial role challenging the Suez Canal. It aims to build small towns, hotels, restaurants and nightclubs around the waterway.
Analysts say that the Egypt's downplaying of the importance of the Israeli project does not conceal the risk it poses to the Suez Canal's $6 billion annual revenues. It is also possible that the alternative canal could win regional backing from countries such as Jordan, which is facing social and economic difficulties. Amman may find in this project a way out of its crises after having failed to garner sufficient Arab support to shore up its economic situation.
It is not unlikely that the Israeli canal project will also win the approval of countries such as Saudi Arabia whose mega-project on the Red Sea, aims to turn the city of Neom into a tourist attraction. The Saudi project may be a short distance away from the proposed Israeli southern end of the Ben Gurion canal at Eilat.
The United States had studied a proposal to build an Israeli waterway to rival the Suez Canal by detonating nuclear bombs in the Negev desert decades ago. According to the US 1963 memorandum, which was declassified in 1996, the plan would have meant the use of 520 nuclear bombs to carve for "excavation of Dead Sea canal across the Negev desert." It said that an "interesting application of nuclear excavation would be a sea-level canal 160 miles long across the Israel." The canal would have opened a pathway to the Red Sea and the Indian Ocean, thus ending the shut down of the Suez Canal. In Cairo, both the government and media have been echoing real public concern at the prospect of an Israeli canal.
Meanwhile, Moscow is majoring on its plan for the Northern Sea Route along Russia's Arctic coast as an alternative to the Suez Canal. The idea had been promoted by Russian President for some time. Russia took advantage of the 380 vessel Suez CanalÂ  traffic jam caused by the Ever Given grounding to re-market the Russian scheme internationally, promising adequate guarantees of safety, movement and low cost.
The distance along the northern sea link from China to European ports is about 40% shorter, cutting by 15 days sailing from Asia to Europe compared with transit via the Egyptian waterway.Â  With climate change, the Arctic route is increasingly free of ice and Russia is promising to send icebreakers for any vessels that become stuck. It is already planning to use the route to export is own oil and gas.
The tailback crisis was a giant headache, given that Suez is the node in the global shipping network with the greatest effect on world trade and due to the global politics, Egypt authority has paid due attention, made serious efforts and resolved the obstacles quickly.

(Mr. Rahaman is a Banker and Freelance Contributor. Email: zrbbbp@gmail.com)