Two presidents but only one was offered a chair 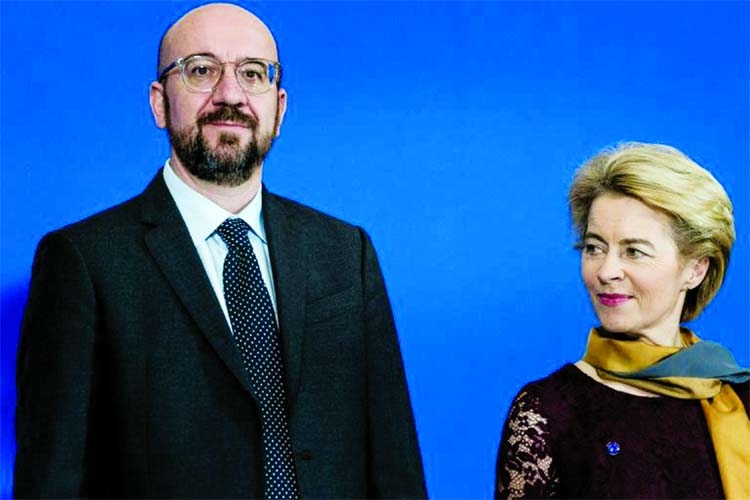 The New York Times :
If diplomacy is part theatre, acted out on meticulously crafted sets, then a protocol blunder this week turned a top-level visit by European Union leaders to Turkey into high drama.
Whether by design or by oversight, Ursula von der Leyen, the president of the European Union's executive arm, was left awkwardly standing as her colleague Charles Michel, the president of the council representing the bloc's 27 members, and President Recep Tayyip Erdogan of Turkey took the only two available seats between the EU and Turkish flags.
"Uhm â¦" von der Leyen was heard saying in a
video as she stood, lingering, in the grand room in the Turkish presidential palace Tuesday while Michel and Erdogan settled in their gilded seats, perfectly centred for a photo op.
Still standing, she raised a questioning hand.
She ended up propped up by cushions on a side sofa several feet away, and lower than the two men. Adding further insult to the faux pas, her position was mirrored on the other side of the room by Turkey's foreign minister, Mevlut Cavusoglu, whom she outranks. Von der Leyen, who is president of the European Commission, and Michel, who heads the European Council, are of equal rank in the EU hierarchy.
"There's a reason why protocol arrangements exist: to try to take the element of atmospherics and drama out of the equation," said Ian Lesser, the director of the German Marshall Fund in Brussels. "These things are not supposed to happen."
Twitter users in Europe swiftly reacted with the hashtag #GiveHerASeat." Many saw the moment as symbolic of the cultural differences between Erdogan's Turkey and the European Union, coming just days after the Turkish leader withdrew his country from the Istanbul Convention, a treaty that seeks to protect women from gender-driven violence.
But if the incident was symbolic of Turkey's poor record on women's rights, it also reflected the European Union's inability to forge a united front in dealing with a country that is a hugely important neighbour and a candidate to become a member of the bloc.
After Michel declined to turn the situation around by offering von der Leyen his seat, the institutions offered diverging views of what had happened and why in a post-mortem on Wednesday.