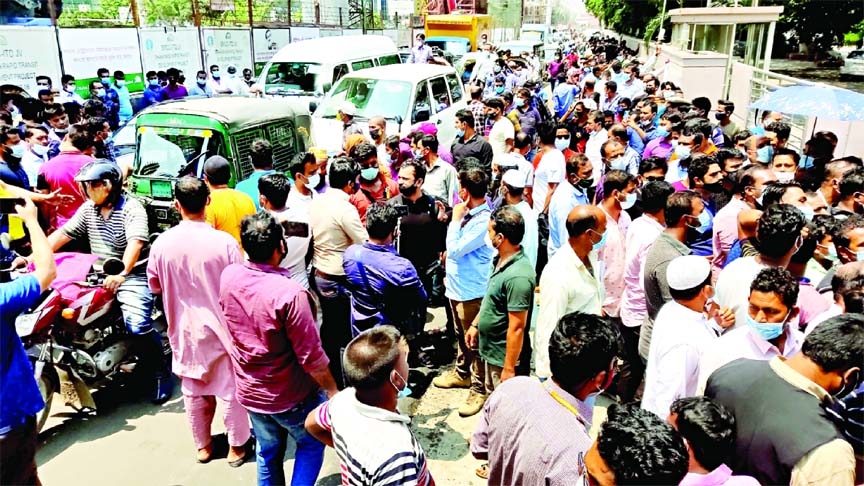 Migrant workers block the road in front of the Saudi Arabian Airlines office in Dhaka\'s Pan Pacific Sonargaon Hotel, after their flights were cancelled on Saturday.

Staff Reporter :
Several hundred migrant workers demonstrated at the Hazrat Shahjalal International Airport (HSIA) in Dhaka on Saturday following cancellation special flights.
They also blocked capital's Karwan Bazar intersection, halting traffic movement on the road.
On the first day of the beginning of the special flights, a total of 14 flights were scheduled to take off and land at the HSIA.
But seven of the flights were cancelled due to lack of landing permission in countries and passengers, official sources said.Â  Â
"A total of seven out of the 14 special flights for Bangladeshi expat workers had to been cancelled as authorities concerned of the respective destinations - Riyadh, Dammam, Dubai, and Jeddah - did not give landing permission and due to shortage of passengers.
"Of those cancelled flights, five were of Biman Bangladesh Airlines and two of Flydubai. The Flydubai flights were cancelled due to passenger shortage," said HSIA Director Group Captain AHM Touhid-ul Ahsan.
Â "Hopefully the problem will be solved within Sunday," he added.
The first flight, bound for Riyadh, was scheduled to depart from HSIA at 6:15am on Saturday.
But Biman was forced to cancel the special flight as Saudi authorities didn't give landing permission, sources at the HSIA said.
Around 200 passengers, who reached the airport over six hours prior to the departure time of the flight. Lhe passengers shouted and demonstrated when the airport and Biman authorities informed them at around 2:00am that the flight was cancelled.
"A special flight to Riyadh was scheduled to take off at about 6:15am, with some 201 passengers. But the flight was cancelled as the Saudi authorities made a delay in giving landing permission," said Tahera Khandaker, DGM (Public Relations) of Biman Bangladesh.
The agitated passengers of the flight soon staged a protest inside the HSIA.
"However, the authorities concerned have made special arrangements for all the passengers at different hotels. They will fly later," said Tahera.
Saudi-bound expatriates said they faced huge sufferings to reach the airport on time due to countrywide strict lockdown.
But at the last moment, they were informed about the flight cancellation, they added.
They said they could have avoided these untold sufferings had Biman informed them about the flight cancellation earlier.
Besides, at least 200 workers demonstrated in front of Saudi Arabian Airlines office at Pan Pacific Sonargaon Hotel around 9:00am of Saturday morning.
Delwar Hossain, who came from Bogura Sadar, said he was scheduled to fly for Saudi Arabia on April 14 but the flight got cancelled.
After the government announced that the workers will be sent through special flights, he came to Dhaka spending Tk 1,500.
"Now, where will I go and stay?" he asked. Â
Mamun of Kishoreganj, who came to Dhaka from Saudi Arabia on vacation, said he was set to fly for the Kingdom but the flight was cancelled in the early hours of Saturday.
"After watching the news on television that the government will arrange special flights for us, I came to Dhaka. But I was not allowed to enter the Biman office now," he said.
He fears that he might lose his job.
The government on April 15 decided to operate around 100 special flights to Saudi Arabia, Qatar, UAE, Oman and Singapore in one week from Saturday so that several thousand migrant workers who remained stuck in the country due to weeklong ban on international flights, can return to their workplaces.
The government on April 11 suspended operation of all international passenger flights to and from Bangladesh for a week from April 14 to contain spread of Covid-19.
According to Bangladesh Association of International Recruiting Agencies (Baira) and Association of Travel Agents of Bangladesh (ATAB) about 20,000 to 25,000 aspiring migrant workers were supposed to catch their due flights in a week starting from Wednesday.