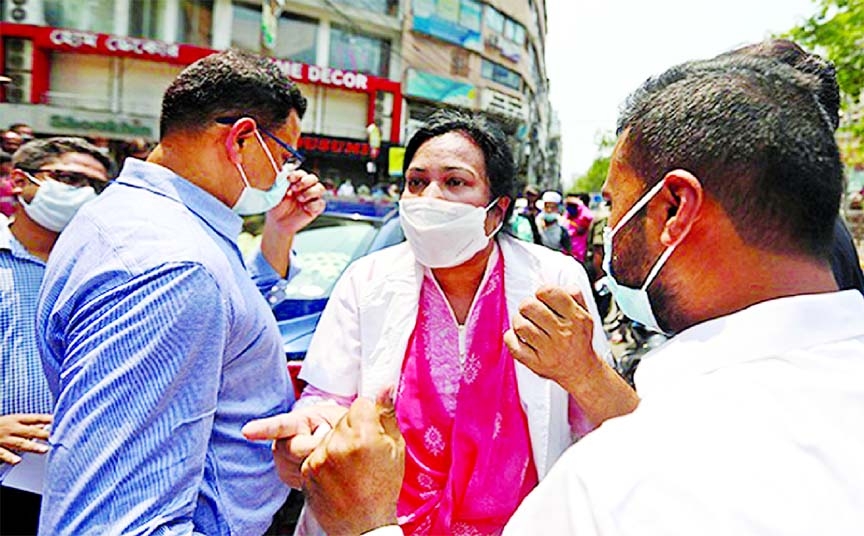 A female doctor got involved in an argument with a magistrate and some police men at Elephant road in the capital on Sunday.

The Bangladesh Medical Association has condemned the alleged harassment that doctors face on their way to work during the ongoing lockdown and urged the authorities to take immediate steps to redress the issue.
In a statement on Monday, the BMA called for the health directorate's intervention and demanded an investigation into an incident in the capital's Elephant Road involving Dr Syeeda Showkat Jenny and law enforcers.
According to BMA, during the ongoing lockdown, doctors and other frontline health workers were being hassled and harassed by law-enforcement agencies in parts of the country. "These incidents have left many of them panicked and frustrated," the association said. Â  The medical association highlighted an altercation between Dr Jenny, an associate professor of Bangabandhu Sheikh Mujib Medical University, and law-enforcement officers over her identity on Sunday, a video clip of which went viral on social media.
Even after affixing the sticker of the medical institution on her car's windscreen and introducing herself while in her medical gown, the doctor was still subjected to harassment, according to the BMA.
"Despite producing various credentials, such behaviour of the law-enforcement agencies only in the name of checking for a movement pass and institutional ID card is not desirable at all. There is no evidence that any vehicle with the sticker of the 'secretariat' or 'police' or 'press' has been detained or stopped."
Most doctors in Bangladesh are involved in private practice and do not work in any government or nongovernmental organisation, said the BMA.
"Therefore, they do not have an institutional ID card."
The BMA complained that the situation had not improved even after the president of the association informed the director general of health services.
"If we do not intervene in the matter as soon as possible and the harassment of doctors and health workers on the streets continues, the doctors and health workers who are already suffering from stress will lose motivation for their work. This is bound to have an impact on the currently fragile health system."
The Bangladesh Swadhinata Chikitsak Parishad, or SWACHIP, condemned the 'harassment' of Dr Jenny and urged the university authorities to press for exemplary action against the law enforcers involved in harassing doctors.
In a letter addressing the matter, it said the fragmented video of 'unsavoury incident' in which Dr Jenny was subjected to 'harassment' by a group of police officers, was deliberately circulated on social media as part of an attempt to discredit the medical community.
According to the organisation, Dr Jenny was heading home from the hospital when the police asked to see her ID. Despite seeing the sticker with the logo of BSMMU on her car and the pass issued by the hospital's director, the police went on to deliberately harass her while dismissing her credentials as "fake".
Although the government has already stated that doctors will not require a 'movement pass' to travel during the lockdown, Dr Jenny was nevertheless asked to produce it, SWACHIP said.
"We were even more surprised to see that at one stage of the argument, the police compared, Dr Jenny to Papia [former Jubo Mohila League leader arrested for crimes], which is extremely insulting to a female doctor."
"We believe that through their actions, the police not only humiliated Jenny, but also Bangabandhu Sheikh Mujib Medical University, the medical community and above all, the respected women.
"We can't even imagine a female doctor being harassed in the name of interrogation with such contempt by so many policemen."