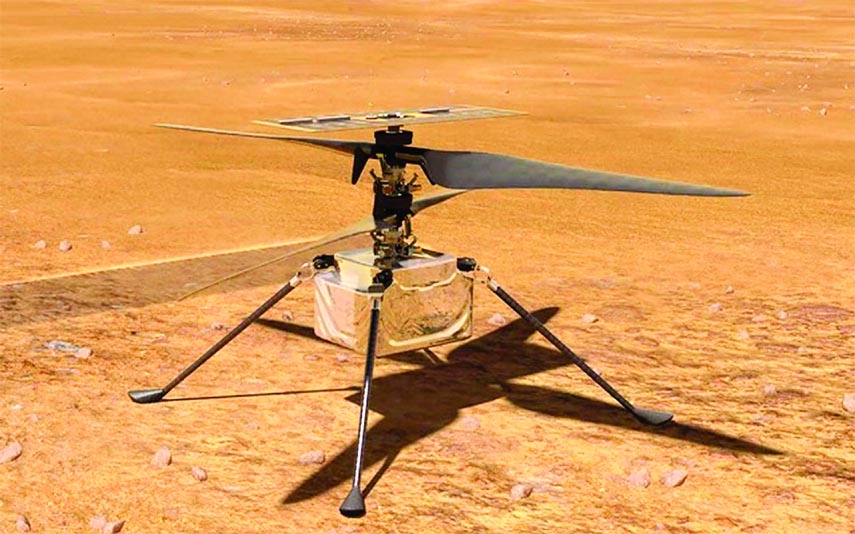 In an undated image provided by NASA/JPL-Caltech, an animation depicting the test flight of NASA\'s Ingenuity helicopter on Mars.

Reuters :
NASA's miniature robot helicopter Ingenuity performed a successful takeoff and landing on Mars early on Monday, achieving the first powered, controlled flight by an aircraft over the surface of another planet, the US space agency said.
The solar-powered whirligig's debut on the Red Planet marked a 21st-century Wright Brothers moment for NASA, which said success could pave the way for new modes of exploration on Mars and other destinations in the solar system, such as Venus and Saturn's moon Titan.
Mission managers at NASA's Jet Propulsion Laboratory (JPL) near Los Angeles burst into applause and cheers as engineering data beamed back from Mars confirmed that the 4-pound (1.8-kg) twin-rotor helicopter had performed its maiden 40-second flight as planned about three hours earlier.
The robot rotorcraft was programmed to ascend 10 feet (3 meters) straight up, then hover and rotate in place over the Martian surface for half a minute before settling back down on its four legs. JPL officials said data returned from Mars showed that this had in fact occurred. During NASA's own coverage of the event livestreamed from JPL headquarters, NASA also displayed the first images from the flight.
A black-and-white photo taken by a downward-pointing onboard camera while the helicopter was aloft showed the distinct shadow cast by Ingenuity in the Martian sunlight onto the ground just below it.
A snippet of color video footage captured by a separate camera mounted on the NASA's Mars rover Perseverance, parked about 200 feet away, showed the helicopter in flight against the orange-colored landscape surrounding it.
"We can now say that human beings have flown an aircraft on another planet," said MiMi Aung, Ingenuity project manager at JPL.