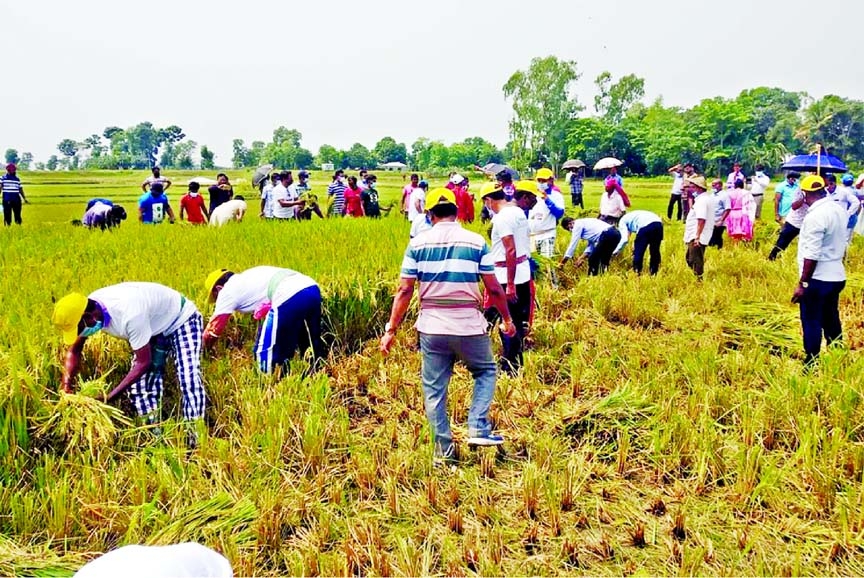 Government employees join farmers in paddy harvesting at the haor areas in Sunamganj on Thursday.

News DeskÂ  :
There is no shortage of farm workers in the country amid the lockdown as 40 percent of paddy in haor areas has already been harvested, said Agriculture Minister Dr Abdur Razzaque on Thursday.
"Enough agricultural workers have been brought from the northern and other districts for harvesting paddy in compliance of health guidelines," he said.
The minister came up with the remarks while addressing a meeting on the progress of the Annual Development Project (ADP) virtually, reports UNB.
An adequate number of harvesting machines, including combined harvesters and rippers, were provided to farmers in haor areas, he said adding that Boro paddy was cultivated on additional 1.20 lakh acres of land compared to the previous year.
Hybrid paddy was cultivated on more than 3 lakh hectares of land additionally this time, Razzaque said, hoping that additional 9-10 lakh tonnes of paddy will be produced this year.
Some 48,83,760 hectares of land was brought under Boro cultivation this season against the target of 48,05,200 hectares, the minister said, adding that the Boro production target is 2.5 crore tonnes this year.
According to the Agriculture Extension Department, a total of 9,46,534 hectares of land was cultivated in haor areas of Kishoreganj, Netrakona, Sunamganj, Moulvibazar, Sylhet, Habiganj and Brahmanbaria districts.