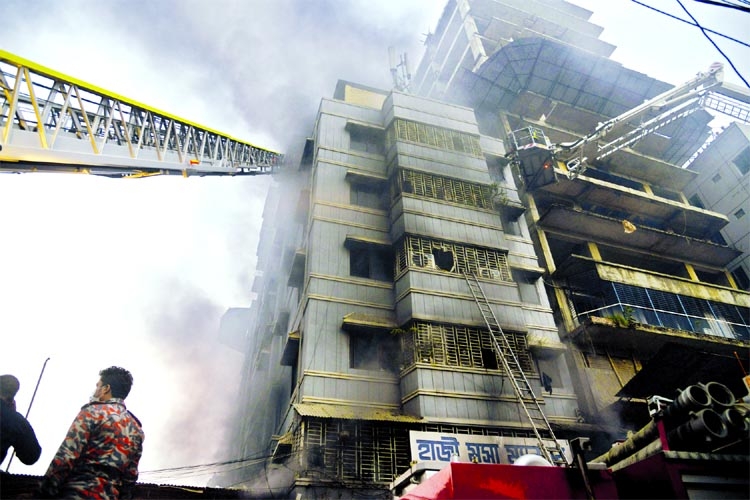 Firefighters trying to douse a fire that killed at least four people at a chemical warehouse in Old Dhaka\'s Armanitola on Friday.

News Desk :
At least four people were killed, and 35 others sustained burn injuries after a massive fire broke out in the Armanitola area of Old Dhaka in the early hours of Friday.
Officials said that the fire started on the ground floor of the six-storey Hazi Musa Mansion in Armanitola at 3.17 am and soon spread to other portions of the building. And it took nearly three hours to douse the flames, reports UNB.
Initially two bodies were recovered by the firefighters but later two more were pulled out from a small room near the stairs of the building, officials said.
One of the deceased has been identified as Suraiya Akhter, 22, a student of Eden Mohila College, while the identities of the three others, including a security guard of the building, are yet to be known.
Among the injured are three fire fighters, who have been admitted to Sheikh Hasina National Institute of Burn and Plastic Surgery, said Rasel Sikdar, Duty Officer of Fire Service and Civil Defence control room.
The injured firefighters have been identified as Liton, 30, Bisnu, 35, and Gias, 40.
"Soon after we were alerted by local people, 19 fire fighters moved to the area. The fire was doused around 6.11 am," Rasel said.
Raihan, Senior Station Officer (Media) of Fire Service and Civil Defence (FSCD) Headquarters, said that building has housed several shops and godowns on the ground floor of Hazi Mansion. "The fire might have originated from a chemical godown."
Director General (DG) of the FSCD Brigadier General Md Sajjad Hossain visited the spot. "A four-member panel will be formed to ascertain the exact cause of the fire," Raihan said.