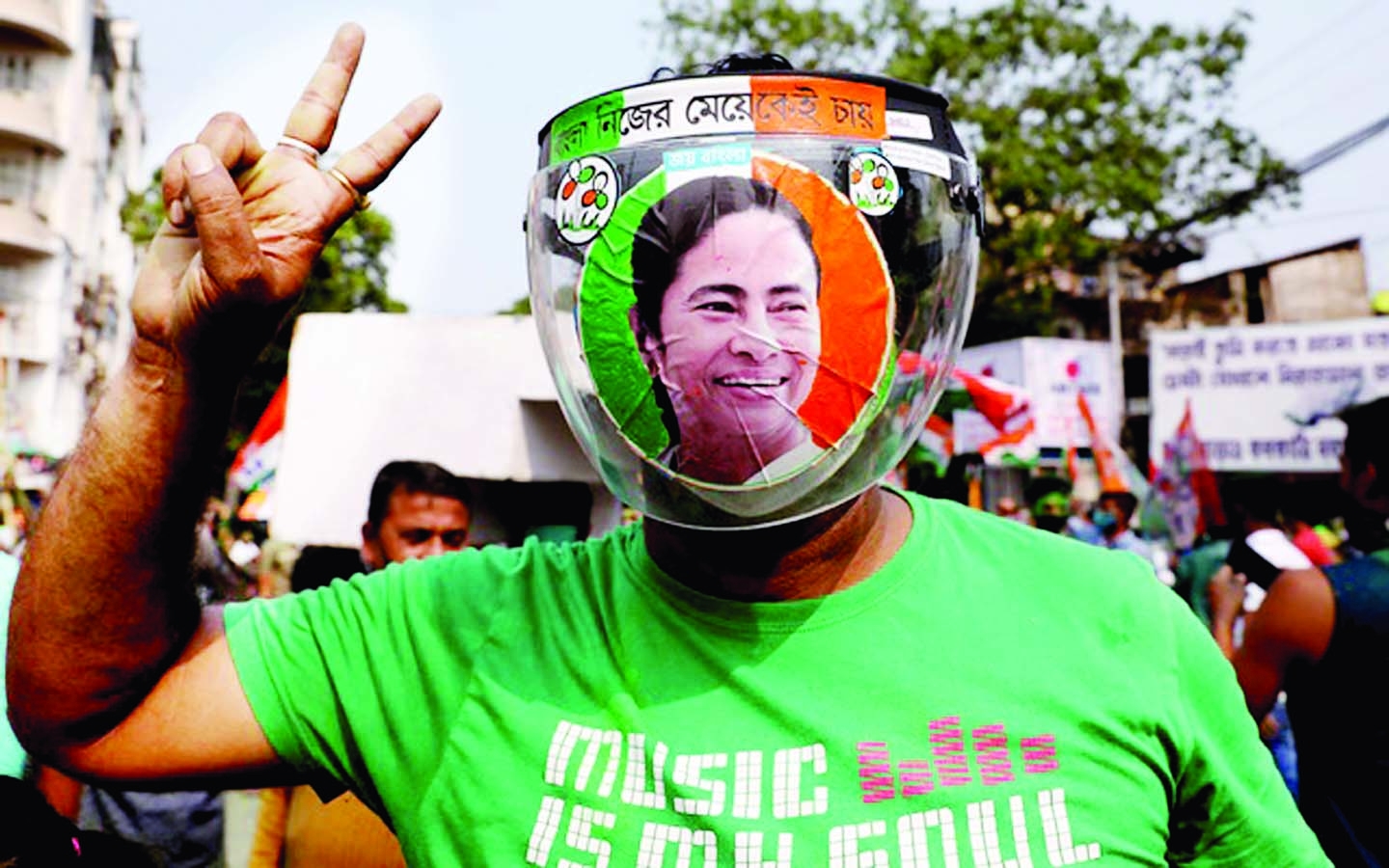 A supporter of the Chief Minister of West Bengal state and the Chief of Trinamool Congress (TMC) Mamata Banerjee, wearing a face shield with her image on it, gestures during celebrations after the initial poll results, amid the spread of coronavirus disea

News DeskÂ  :
"Eta Banglar joi. Banglar manusher joi. Bangla gota Bharat-ke Baanchiyechey," West Bengal Chief Minister and Trinamool Congress leader Mamata Banerjee declared Sunday after her party's landslide victory in the state assembly elections.
Addressing her first media conference, standing on her feet and no longer requiring the wheelchair, in Kolkata, she said the first priority of her new government would be to tackle the Covid-19 situation in the state.
She said her swearing-in as Chief Minister would be a simple event due to the pandemic but did not give a date for it.
A victory rally would be organised at Kolkata's historic Brigade Parade Ground when the Covid-19 situation improves.
Mamata asked the government of Prime Minister Narendra Modi to announce free coronavirus vaccines for all 133 crore people of India saying it would cost Rs 30,000 crore which "is nothing" for the Indian government.
Congratulations poured in for Mamata.
"Congratulations @MamataOfficial didi for the landslide victory. What a fight! Congratulations to the people of WB," tweeted Delhi Chief Minister and Aam Aadmi Party supremo Arvind Kejriwal .
Nationalist Congress President chief Sharad Pawar tweeted: "Congratulations @MamataOfficial on your stupendous victory! Let us continue our work towards the welfare of people and tackling the pandemic collectively."
Samajwadi Party chief Akhilesh Yadav in a tweet congratulated the people of Bengal for being "conscious" and hailed the workers' efforts in defeating BJP's "politics of hate".
TMC national spokesperson and Rajya Sabha MP Derek O'Brien described it as a "momentous" day for India and West Bengal.