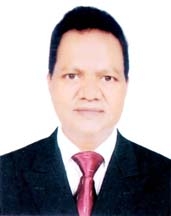 Dr. Md. Shamsul Arefin :
The growth in garments sector, surge of migrants' remittances and increased agricultural yields have triggered development of our economy in recent years. The government has also been relentlessly pursuing this development agenda since 2009. Agricultural strategy of the government on using shallow tube wells and low-lift power pumps instead of deep tube-wells, making available fertilizer, pesticides and high yield variety of seeds in open markets at low cost or affordable price have been the real drivers to increase in agricultural yields in Bangladesh. Pro agricultural government policy has given tremendous productivity in agriculture sector from 2010 in Bangladesh. With more than 160 million of inhabitants, averaging more than 1200 inhabitants per squared kilometer, Bangladesh has made remarkable progress in agriculture, poverty reduction, supported by sustained economic growth. As aresult, Bangladesh reached lower-middle-income status in 2015 and graduated as developing country from the UN's Least Developed Countries (LDC) list in 2021.
The development of the ready-made garments (RMG) industry can probably be considered the greatest success of the Bangladesh's economy and ''made in Bangladesh" labels have indeed become familiar to many western consumers. Now Bangladesh is the world's second largest exporter of garments after China.
Though the foundation of RMG was established by the Desh Garments, a local textile companywhich has shown us the way of garments business in 1980. In that time, Bangladesh lacked the specific technical know-how and adequately trained workforce needed for a production of apparels to be able to meet the international demand. In 1996, the government had taken all-out effort to flourish RMG industries and trained management staff from outside countries as human capital that constituted the seed from which, in a few years, the Bangladeshi RMG industry thrived. Some of trained personnel started textile companies on their own; others entered the brokerage business of textile products, connecting between the demand of international clothing brands and the growing supply of local producers. The development of Bangladesh's garment industry can be seen as an unintended side effect of the Multi Fibre Arrangement (MFA) quota system, which opened up an opportunity that the country has been able to seize. Despite quotas, exports continued to grow because of European Union which decided to not impose import restrictions on garment product of Bangladesh.
It is observed that the end of MFA in 1994, Mexico in the U.S. market and Turkey in the EU market lost their market share despite of having preferential access and geographical proximity. In addition, all major apparel exporters except Bangladesh, Vietnam, and China lost their market share since 2008 due to the global recession in their export destinations. But Bangladesh not only uphold its past gains, but also improved its performance considerably during both post-MFA and recession periods. This surprising and overwhelming growth of our RMG sector is attributed to continuous support from the government, lowest wage rate, lower export price, accompanied by stable exchange rate, political stability since 2007 and above all, getting the Generalized System of Preferences (GSP) facilities for being remained in the least developed nations lists.In fact, since 2011 the RMG industry of Bangladesh has managed to almost double its world market share, increasing it from 2.54% in 2007 to 4.40% in 2011, and 6.8% in 2020 to become the second largest exporter of RMG.
According to the Bangladesh's Bureau of Manpower, Employment and Training (BMET, 2019) more than nine million of Bangladeshi workers expatriated toward more than 140 destinations over the period 1976-2017. In particular, hundred thousand of migrants found employment as construction workers in the Middle-East countries which alone absorbed almost three quarters of the Bangladeshi migrants.
Moreover, government funded training programs helped migrant workers to acquire skills demanded by foreign countries' labor markets. The present government's intervention is aimed to foster and encourage inflows of remittances in formal channel. Thus, efforts have been continued in order to increase competitiveness and to reduce money-transfer fees and exchange rate margins. The Government encouraged national commercial banks to open branches in countries of expatriationsuch as United Kingdom, United States, Australia, Singapore, Malaysia, United Arab Emirates so that they can transfer money easily. In 2010, the Government established the Probashi Kallyan Bank to provide subsidized financial services to migrants. The Bangladesh Bank has taken all out measures with some incentives package to bring remittances through formal channels with cheap transaction costs and less transfer time.
Now, we all understand that the tremendous increase of agricultural productivity, the inflows of 20 billion US dollarsremittance of migrant workers in formal channel and the 34 billion U.S. dollarsexport earning of the ready-made garments industry have never been able to make possible without judicious intervention of public policy articulated by the present government under the dynamic leadership of the Prime Minister Sheikh Hasina. Â
Keeping growth sustainable cannot be the responsibility of the party in power alone anywhere in the world. Those who unitedly in a country of developing world have been trying to keep their growth sustainable in Covid 19 pandemic, situation is getting favorable to them. Indeed, we understand that continuing economic growth, graduation from LDC's list and situation of Covid 19 pandemichas increased a higher level of responsibility amongst political parties, bureaucrats, professionals, academics, business, private sector, journalists and faith-based groups for maintaining its growth sustainability. If this level of economic growth is not sustained well due to absence of our greater sense of responsibility, we all may face suffering of recession.