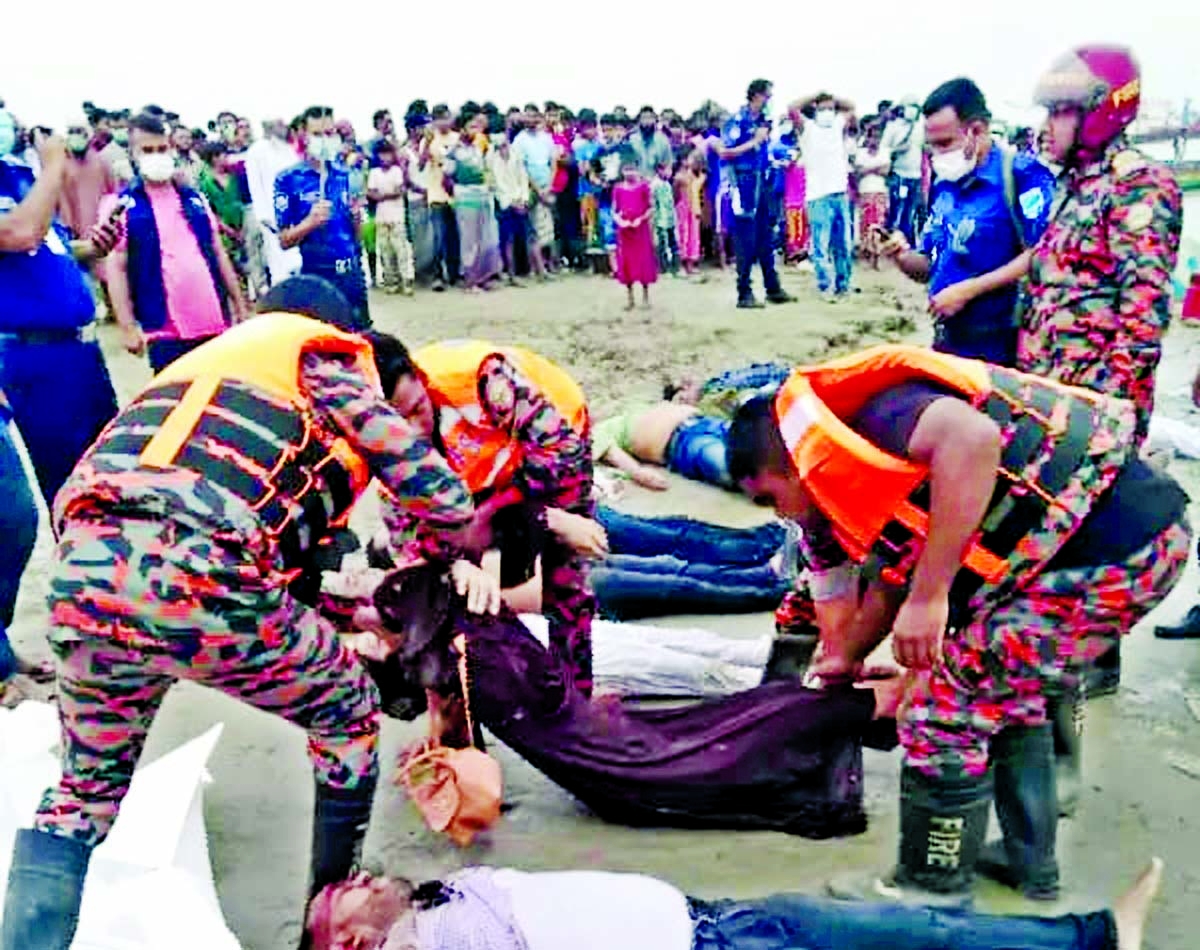 The bodies of victims being recovered following a collision between a sand-laden bulk carrier and a passenger speedboat on the Padma River in Madaripur\'s Shibchar on Monday.

Syed Shemul Parvez :
At least 26 people died after a speedboat sank in the Padma River at Shibchar upazila in Madaripur on Monday morning. Besides, five people were recovered alive from the spot.
Shibchar Upazila Nirbahi Officer Md Asaduzzaman, confirmed the news to the media.
"A speedboat sank in the Padma River after it hit a standing sand-laden bulkhead at 6:45am. Later, bodies of 24 people were recovered from the spot and two others died on the way to hospital," said Miraz Hossen, officer-in-charge of Shibchar Police Station.
Accidents occur in the Padma river frequently. Sometimes occur in ferry, sometimes in launch.
However, speedboats accidents are very common in this river.
But no one has ever seen so many casualties before by a speedboat overturn.
The words were said by Haque Saheb (39), a resident of Banglabazar Ferry Ghat in Madaripur. Many like Haque have also made same comment.
According to locals, speedboat accidents often occur in Padma due to reckless speed and carrying extra passengers.
The Bangladesh Inland Water Transport Authority (BIWTA), police and naval officials could not answer how the speedboat could carry passengers even though it was illegal to carry passengers on the Padma.
So far, 26 bodies have been recovered in a speedboat accident with a sand-carrying bulkhead in the Padma on Monday morning.
It was possible to identify the address of 17 people till 4:30 pm and several teams of law enforcement agencies are working to identify the rest.
After the fatal incident, Faridpur region Naval Superintendent Abdul Barek visited the spot.
At the time, he said, 'the speedboat movement was completely stopped as the strict lockdown was effective.
He further said that there is no legitimacy to carry passengers in speedboats in Padma. However, when asked why speedboat was moving, he avoided the question.
BIWTA Shimulia Ghat Assistant Director (Department of Maritime Safety and Traffic Management) Shahadat Hossain told the media, "Many people including the Director General of the Department of Shipping, Chief Engineer, Chief Surveyor and Chief Inspector have also come to inspect the spot."
How the speedboat left the ghat during the lockdown is a common question for everyone.
Speedboat has no registration. So they are going as their own will.
Madaripur Superintendent of Police Golam Mostafa Russell said, "The Ministry of Shipping looks about the approval of the vessels that transport passengers across the Padma River.
" We work to provide safety for passengers. If there is any illegal vessel movement, we generally come forward if the concerned department asks for cooperation.
Even then, as passenger transport is not allowed on the speedboat, we will work on the matter, he added.
In the meantime, Shah Alam, the driver of the speedboat, has been arrested in connection with a collision between a sand-loaded bulkhead and a speedboat.
Meanwhile, a six-member committee was formed on Monday to investigate the speedboat capsize in the Padma River.
The local administration formed the probe body after the incident, Mohammad Raihan, Fire Service and Civil Defence Headquarters Station Officer (Media cell), told media.