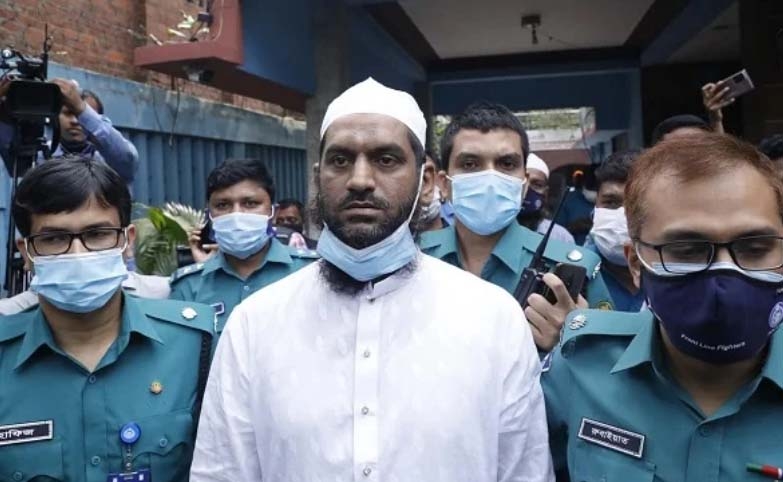 News Desk :
A Dhaka court has granted a five-day remand to Mamunul Haque, joint secretary-general of the defunct central committee of Hefazat-e-Islam and general secretary of Dhaka metropolis, in a case filed in connection with the Baitul Mukarram mayhem on March 26 this year.
Dhaka Metropolitan Magistrate Satyabrata Sikder granted the remand after a court hearing on Tuesday.
On the day, accused Mamunul Haque was produced in the Dhaka Metropolitan Magistrateâs Court.
The investigating officer of the case appealed to remand him for a total of 17 days in two separate cases filed with the Paltan Police Station in connection with the Baitul Mukarram mayhem in March this year. At that time, his lawyer appealed for bail on behalf of the accused. The state, on the other hand, opposed bail. After hearing, the court granted a total of five days remand to Mamunul in two cases of Paltan Police Station.
Mamunul Haque was remanded for a total of seven days â four days in a case filed with Paltan Police Station on April 26 and three days in a case filed with Motijheel Police Station. Dhaka Metropolitan Magistrate Sadbir Yasir Ahsan Chowdhury issued the remand order after the hearing. Mamunul Haque will be taken to court again today after the remand.
Earlier on April 19, Mamunul was produced before the court. Before this, the police had appealed for a seven-day remand against him. Following the hearing, Dhaka Metropolitan Magistrate Devdas Chandra Adhikari granted a 7-day remand.
Police arrested Maulana Mamunul Haque, joint secretary general of Hefazat-e-Islam, from Jamia Rahmania Madrasa in the capitalâs Mohammadpur on April 16 at noon.
Hefazat-e-Islam has been wreaking havoc in several districts of the country, including Dhaka, over the visit of Indian Prime Minister Narendra Modi. Massive violence was reported in the Brahmanbaria district. Targeted attacks with arson were carried out on government installations. The Hefazat leaders and activists turned the signboard area in Narayanganj into a battlefield. The media was not spared from their anger.
Hundreds of cases of violence were registered in different districts of the country. Among them, CID has been given the charge of investigating 23 sensitive and important cases in Brahmanbaria, Narayanganj, Kishoreganj, Munshiganj and Chattogram districts.
Leaders and activists of Hefazat-e-Islam laid siege to Dhaka on May 5, 2013. In the name of the blockade, Hefazat workers vandalized and set fire to vehicles and public and private facilities in Motijheel, Paltan and Arambagh areas in the capital with sticks, sharp weapons and firearms. A case was filed with the Paltan police station.
Recently, Hefazat-e-Islam Bangladesh carried out violent and destructive activities at various places including Baitul Mukarram Mosque, Paltan and Jatrabari. Later, several cases were filed with different police stations in the capital. Various government intelligence agencies, including the police, are investigating the case.
As part of the investigation, eyewitnesses of the incident, the information provided by the detainees, as well as video footage of the incident are being reviewed to identify those involved. Police are arresting the suspects soon after it was confirmed.