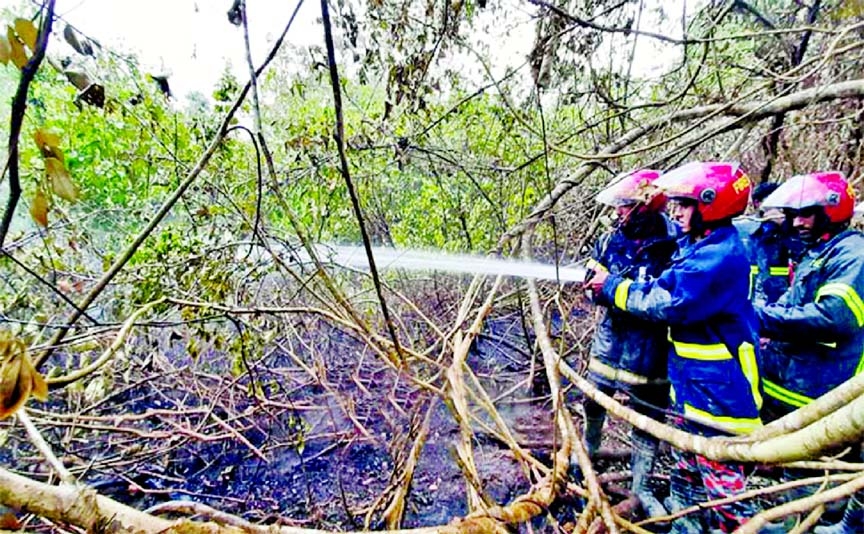 News Desk :
The fire, which had raged through Daser Bharani under Sharankhola Range of the Sundarbans East Forest Division, was finally brought under control on Tuesday afternoon, nearly 30 hours after it broke out.
Localas said the fire damaged more than five acres of the forest.
Divisional forest officer (DFO) Mohammad Belayet Hossain said, "The fire is now under control. Firefighting units have been working since Tuesday morning to douse the blaze." He said the extent of losses caused by the fire is negligible.
"We have started spraying water around 10:30 am and three units of firefighters from Sharankhola, Mongla and Bagerhat have been working to fully douse the flame," said Abdus Sattar, an officer at Sharankhola Fire Service and Civil Defence.
He said the fire service team had to struggle a lot to control the fire for lack of water. So, we installed a 2-km pipeline connecting the site of fire and the Morabhola River.
Meanwhile, the Forest Department formed a three-member probe body with Mohammad Joynal, the chief conservator of forest of the Sharankhola Range, as its head to probe the fire incident.
Meanwhile, locals suspect about five acres of forest land has been damaged by the fire, reports our
On February 8 this year, another fire at Dhansagar station under Chandpai range of the Sundarbans East Division had burnt down at least four decimals of forestland.
About 90 acres of forest land has been burnt in 31 fire incidents in the last 19 years in the Sundarbans, according to the Forest Department.