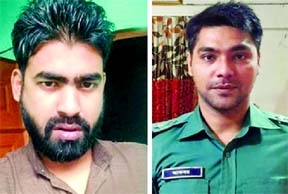 Sylhet Bureau :
The Police Bureau of Investigation (PBI) has filed a charge sheet against six people including the prime suspect suspended Sub-Inspector Akbar Hossain in a case filed over the death of Rayhan Ahmed at Bandarbazar police outpost in Sylhet.
The remaining accused include four other policemen and a local journalist, said PBI's Superintendent of Police Md Khaleduzzaman, adding that the charge sheet was filed with the Sylhet Chief Metropolitan Magistrate's Court on Wednesday morning.
The six accused were Akbar Hossain, the then in-charge of the Bandarbazar police outpost, Hasan Ali, Sub-Inspector, Ashek Elahi, Assistant Sub-Inspector, Harunur Rashid and Titu Chandra, constables of the same outpost and Abdullah Al Noman, a journalist from Sylhet's Companiganj.
PBI Sylhet office Special Superintendent Khaled Uzzaman confirmed the news and said that the charge-sheet handed over to the court police at about 11:00am.
On October 11, 34-year-old Rayhan, a resident of Akhalia in Sylhet city, was beaten to death in police custody at Bandar Bazar police outpost.
The next day, Rayhan's wife Tahmina Akhter Tanni filed a case under the Torture and Custodial Death (Prevention) Act 2013 with Sylhet Kotwali police station. The case was then transferred to the PBI following the family's demand.
A forensic medical board of Sylhet MAG Osmani Medical College and Hospital, in its second autopsy report, said Rayhan had died due to injuries he sustained from a blunt weapon.
In the first autopsy report, the doctors found 111 injury marks on Rayhan's body. Of them, 14 were serious injuries.
A probe body of Sylhet Metropolitan Police (SMP) also found the truth of the torture. SI Akbar, the then in-charge of Bandar Bazar police outpost, and three police personnel were suspended on October 12 while three others were also withdrawn from the outpost.
Akbar fled from police custody on October 13 and was arrested from the Dona border in the northeastern district's Kanaighat upazila on November 9.
On October 22 of the same year, former SMP Commissioner Golam Kibria was transferred over widespread criticisms of the role of police after Rayhan's death.