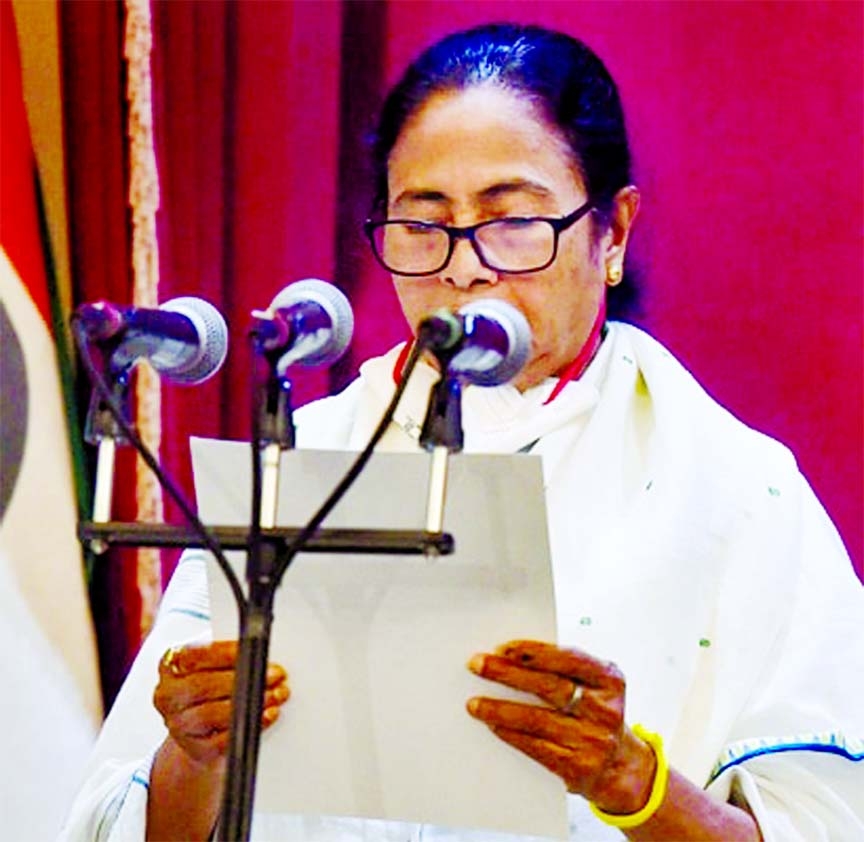 Mamata Banerjee was sworn-in as West Bengal chief minister in Kolkata on Wednesday.

Agencies :
Trinamool Congress supremo Mamata Banerjee was sworn-in as West Bengal chief minister for the third straight term today after she spearheaded her party to a remarkable victory in the assembly polls.
Mamata in her trademark white Sari and shawl, took oath in Bengali. The rest of the cabinet and the council of ministers will be sworn in on May 9, the birth anniversary of Rabindranath Tagore.
Earlier, she called on Governor Jagdeep Dhankhar at Raj Bhavan and resigned as the chief minister, as is the practice, before she was administered the oath of office and secrecy again. Earlier Monday, Banerjee addressed a press conference where she spoke of a "collective fight" by the opposition against the BJP in the 2024 Lok Sabha elections, but underscored combating the Covid-19 crisis should be the first priority.
"I am just a street fighter. I can boost the morale of the people so that we can fight a strong fight against the BJP. One cannot do everything alone and it should be a collective effort. If collectively we can take a decision, together we can fight the battle of 2024. Â  But first let us fight this COVID crisis and then we will decide on this. Now is not the time," she said, responding to a question about her role in the 2024 general elections.
Later, the newly elected MLAs of the TMC met and unanimously chose her the leader of the legislature party, before she called on the governor to stake claim to form the government. Banerjee, who lost from Nandigram despite the astounding TMC victory, can be sworn-in as the chief minister but will have to get elected to the assembly within six months of assuming office.
NDTV reported: The oath ceremony took place with Covid protocols in place at the "Throne Room" at the Raj Bhavan.
Mamata Banerjee won a landslide victory in the Bengal election to secure a third straight term. The Trinamool won 213 of 292 seats while its strongest rival, BJP, finished second with 77 seats.
Mamata Banerjee will head to her office Nabanna, where she will be given a guard of honour by the Kolkata Police.
She is expected to start her new term with a meeting with top officials on the Covid situation and law and order in the state.
Since the election verdict on Sunday, there have been clashes involving both the Trinamool Congress and the BJP. Both parties have traded blame for the violence.
Mamata Banerjee yesterday told NDTV she believed the BJP was trying to stir trouble in the state after its defeat. "It is their baby. They have spoiled the situation. Some sporadic incidents are there, but that will be tackled. After election it happens in every state. I don't want any violence or anything. BJP is trying to create communal clash, because of their shameful defeat," she said, insisting that she had been telling her supporters to stay indoors and not celebrate at all.