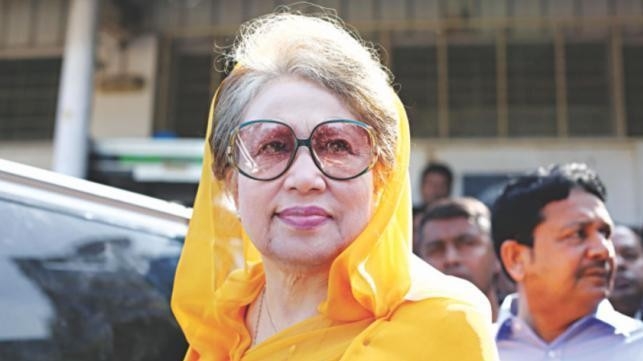 bdnews24.com :
The government has nothing to do if BNP Chairperson Khaleda Zia, who has been admitted to a Dhaka hospital with COVID-19, wants to take treatment abroad, the home minister has said.
Asaduzzaman Khan Kamal says the former prime minister must secure a court directive first to take treatment abroad and the government has yet to receive any plea on the matter.
Attorney General AM Amin Uddin, however, says that the government will determine whether she needs to travel abroad for treatment.
The 76-year-old is undergoing treatment at Evercare Hospital in the capital after she caught coronavirus. She has other complications.
Khaleda had been living in her Gulshan residence since the government granted her a suspended sentence in March 2020.
She had served 25 months out of 17 years of prison sentences in two graft cases, involving Zia Orphanage Trust and Zia Charitable Trust.
The government-imposed two conditions on the suspended sentence: Khaleda will not be able to travel abroad and must receive treatment at home.
Some media outlets reported that her family have applied for government permission to send her abroad for treatment after she was admitted to the hospital. Â
On Tuesday, Home Minister Kamal faced questions from journalists over the matter at two events.
He denied getting any petition from Khaleda or her family.
Asked what the government will do if the family files a petition for her treatment abroad, Kamal said, "The prime minister (Sheikh Hasina) has given the opportunity to treat her (Khaleda) at home. They (Khaleda's family) must come through court if they want more."
Attorney General Amin said, "The government will review how much treatment she needs and whether the treatment is available in Bangladesh."
"If the government thinks that it (Khaleda's treatment abroad) is necessary, they (government) will come to court. The order (on the suspended sentence) was issued by the government," he added.