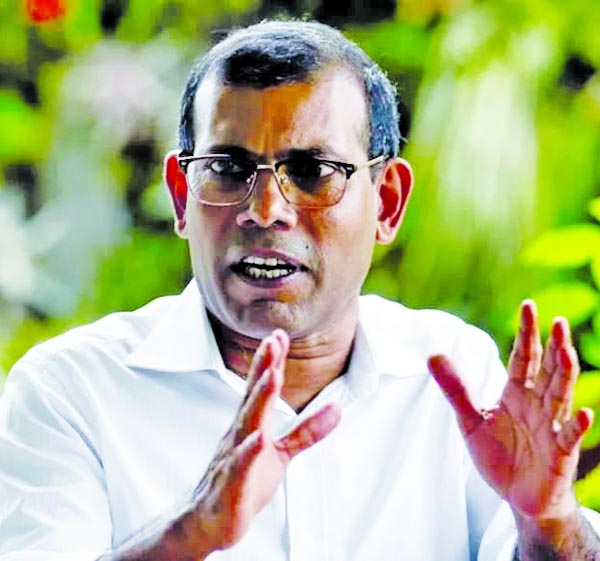 Al Jazeera :
Mohamed Nasheed, the former Maldives president and current speaker of parliament who was wounded in a bomb attack, was in "critical condition" after undergoing multiple surgeries, doctors said.
The 53-year-old had just left his house in the capital,
Male, and was about to get into his car late on Thursday when a bomb attached to a motorbike exploded. Residents said the blast was heard across the city.
Nasheed sustained several wounds in the blast and was taken to ADK Hospital where he underwent multiple "successful" surgeries. On Friday afternoon, the hospital said Nasheed had undergone "a successful final, critical, life-saving procedure".
"Over the course of past 16 hours he had life-saving surgery on injuries to his head, chest, abdomen and limbs. He remains in a critical condition in intensive care," it wrote on Twitter.
Nasheed's brother, Nazim Sattar, had tweeted earlier on Friday: "They have finished the surgery and now it's the long road to recovery."
According to the hospital, Nasheed was treated by a multi-specialty medical team after he was brought in around 8:30pm on Friday. The need for further surgeries was identified during an assessment of his wounds, it added.
His three injured bodyguards were also taken to hospital and later released.
President Ibrahim Mohamed Solih on Thursday went to the hospital where Nasheed, a close ally, was being treated and called an emergency meeting following the attack.
Solih said on Friday the explosion was "an attack on democracy" and the Maldives' tourism-dependent economy, and announced that Australian federal police investigators will arrive on Saturday to assist an investigation.
Neither the president nor police have given further details on the attack and no one has claimed responsibility.
Meanwhile, many Maldivian officials and citizens took to social media to condemn the attack and wish Nasheed a speedy recovery.
Neighbouring India's External Affairs Minister S. Jaishankar also expressed deep concern at the attack and said Nasheed "will never be intimidated".
"This is very significant, not just in terms of scale but also in terms of target," Michael Kugelman, deputy director of the Asia Program and senior associate for South Asia at the Wilson Center, told Al Jazeera.
"The fact that you have a former president who is still a very prominent political figure and a very prominent democratic leader in a region that is now marked by strongmen and hardline nationalists â¦ is quite a big deal," Kugelman said.
Nasheed in 2008 became the Maldives' first democratically elected president, ending Maumoon Abdul Gayoom's 30-year rule.
But in 2012, he was forced out of office in a coup. In disputed elections the following year, he was defeated by Gayoom's half-brother, Abdulla Yameen.
In 2015, Nasheed was sentenced to 13 years in jail on terrorism charges widely criticised as politically motivated. A year later, he was granted prison leave for medical treatment in London. Nasheed was granted asylum in the United Kingdom in 2016 and returned to the Maldives after his nominee, Solih, won the 2018 presidential election, dealing a shock defeat to Yameen.
In 2019, he went on to win a parliamentary election and became speaker, the second most powerful position in the country.
Nasheed sustained several wounds in the blast and was taken to hospital for treatment, including surgery [AFP]
Nasheed has championed global efforts to fight climate change and has also been an outspoken critic of religious "extremism" in the Maldives, a Sunni Muslim nation where preaching and practicing other faiths are banned by law.
Kugelman said political motivation was "always a possibility" behind the explosion that wounded Nasheed but also noted "there is a modest history of Islamist militancy in the Maldives."
The country of some 340,000 people, a popular Indian Ocean holiday destination, has seen rare violent attacks, including against independent journalists. Some 300 Maldivians are known to have travelled to Syria to join ISIL (ISIS) at the height of the fighting there.
The armed group claimed a boat arson attack in the Maldives last year but there is little evidence the group has a presence in the archipelago.
In 2019, investigators said journalist Ahmed Rilwan Abdulla, who went missing in 2014, was killed by a local affiliate of al-Qaeda, publicly acknowledging for the first time the hardline group's existence and efforts to silence liberal voices in the Maldives.
Yameen Rasheed, a prominent liberal blogger who led a campaign to find Rilwan, was killed in 2017.