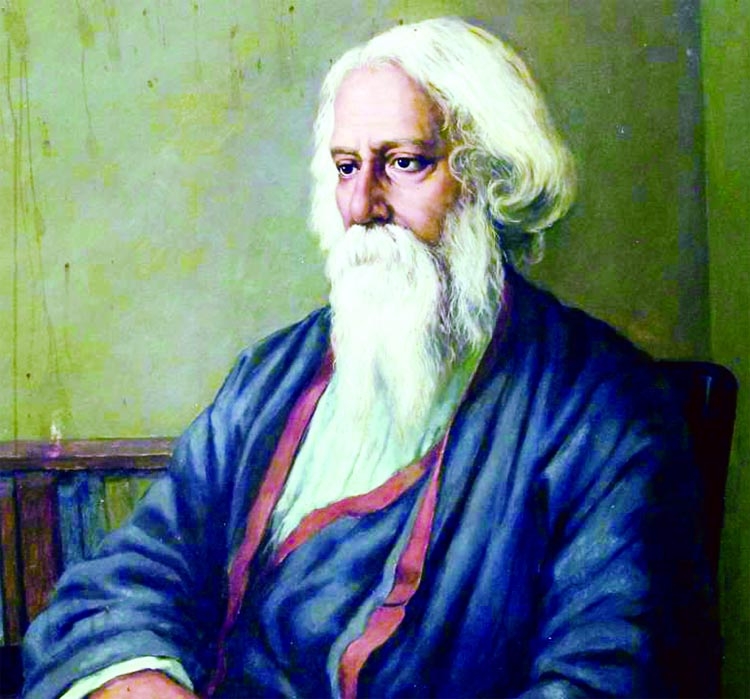 News Desk :
Today is the 160th birth anniversary of Biswakabi Rabindranath Tagore, who reshaped Bengali literature and music as well as arts of Indian subcontinent with contextual modernism.
On the occasion of the birth anniversary ofRabindranath, President Abdul Hamid and Prime Minister Sheikh Hasina issued separate messages yesterday, paying rich tributes to the poet, reports BSS.
The President, in his message, said, "Rabindranath Tagore is the main genius of Bengali consciousness and thinking, he was free to roam in almost all branches of Bangla literatureâ¦ He is also known as one of our best composers, painters, sociologists and philosophers."
"After all, he is also the main embodiment of Bengali nationalism. Rabindranath came to prominence around the world in 1913, winning the Nobel Prize in Literature for his book Gitanjali. He is the first Achieved this highest recognition of world literature as a non-European. He brought the pluralism of Indian culture, non-violence of Buddhism and Sufism of Islam and the prophetic consciousness of the Bauls of Bengal to the world," added the president.
The Prime Minister in her message said, "Rabindranath was a man of many talents, the humanism at the root of all the poet's creations has made him special. Rabindranath, the poet of peace and humanity, was a devotee of the eternal beauty and diversity of nature. Rabindranath's sense of nationalism is a source of eternal inspiration for Bengalis."
"In the great war of liberation of 1971, his poems and songs inspired the freedom-loving Bengalis to fight against the enemy. RabindraSrishti moves our consciousness at the juncture of every problem-crisis, joy-pain and hope-despair of life. The poet was a close relative of the land and people of Bangladesh," she added.
"During his stay in Shilaidaha, Shahjadpur and Patisar, his contribution to the upliftment of the people of the region is undeniable. His rural development efforts for the rural poor are still followed by us today. The Awami League government has established 'Rabindra University, Bangladesh' in Sirajganj in honor of world poet Rabindranath Tagore," said the Premier.
Bangabandhu Sheikh Mujib adopted Tagore's immortal creation 'Amar Sonar Bangla, I Love You' as the national anthem of Bangladesh, she said.
Nobody had influenced the minds of so many Bengali-speaking people before or after him. His influence has been compared, by many, to Shakespeare in the English-speaking world.
The youngest of thirteen surviving children, Tagore, nicknamed 'Rabi', was born on 25th of Bengali month of Baishakh in 1268 (May 7, 1861) in Jorasanko Mansion in Kolkata to Debendranath Tagore and Sarada Devi.
His novels, short stories, songs, dance-dramas and essays always speak about the political and personal life of people.
Gitanjali (Song Offerings), Gora (Fair-Faced) and Ghare-Baire (The Home and the World) are his best-known works and his verse, short stories and novels were acclaimed-or panned-for their lyricism, colloquialism, naturalism andunnatural contemplation.
Author of Gitanjali, profoundly sensitive, fresh and beautiful verse, Rabindranath became the first non-European to win the Nobel Prize in Literature in 1913.
Sometimes referred to as "the Bard of Bengal", Tagore's poetic songs were viewed as spiritual and mercurial.
His compositions were chosen by two nations as national anthems:
Bangladesh's Amar Sonar Bangla and India's Jana GanaMana. The Sri Lankannational anthem was inspired by his work.
The legendary poet breathed his last at his paternal residence in Kolkata on Sraban 22 of Bangla year 1348 (August 7, 1941).
Bangladesh Television and other private television channels and Bangladesh Betar will air special programmes highlighting the life and works of Rabindranath.