Chinese rocket tumbling back to earth 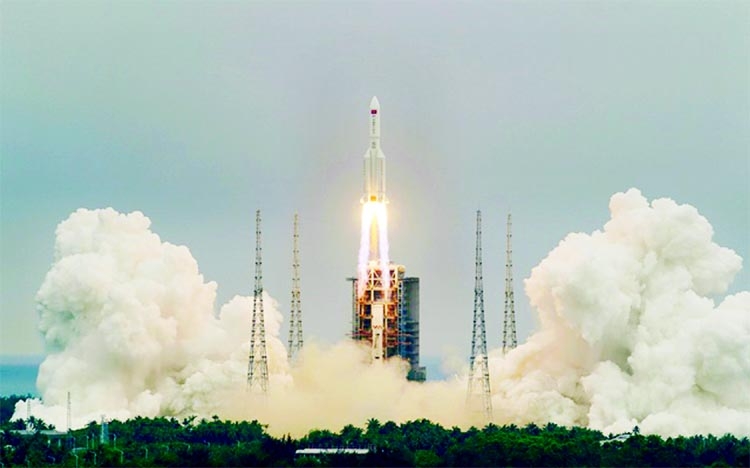 The New York Times :
No, you are almost certainly not going to be hit by a 10-story, 23-ton piece of a rocket hurtling back to Earth.
That said, the chances are not zero. Part of China's largest rocket, the Long March 5B, is tumbling out of control in orbit after launching a section of the country's new space station last week. The rocket is expected to fall to Earth in what is called "an uncontrolled reentry" sometime on Saturday or Sunday.
Whether it splashes harmlessly in the ocean or impacts land where people live, why China's space program let this happen - again - remains unclear. And given China's planned schedule of launches, more such uncontrolled rocket reentries in the years to come are possible.
The country's space program has executed a series of major achievements in the past six months, including returning rocks from the moon and putting a spacecraft in orbit around Mars. Yet it continues to create danger,
however small, for people all over the planet by failing to control the paths of rockets it launches.
"I think it's negligent of them," said Jonathan McDowell, an astrophysicist at the Center for Astrophysics in Cambridge, Massachusetts, who tracks the comings and goings of objects in space. "I think it's irresponsible."
The piece that will be dropping out of the sky is the core booster stage of the Long March 5B, which was designed to lift the big, heavy pieces of the space station. For most rockets, the lower stages usually drop back to Earth immediately after launch.
Upper stages that reach orbit usually fire the engine again after releasing their payloads, guiding them toward reentry in an unoccupied area like the middle of an ocean.
Over the past three decades, only China has lifted rocket stages this big to orbit and left them to fall somewhere at random, McDowell said.
For the Long March 5B booster, that could be anywhere between 41.5 degrees north latitude and 41.5 degrees south latitude. That means Chicago, located a fraction of a degree farther north, is safe, but major cities like New York could be hit by debris.