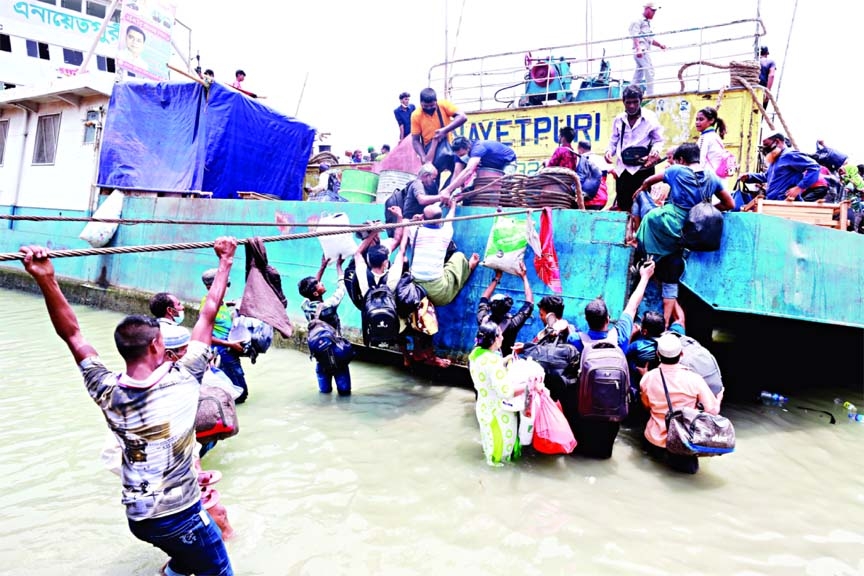 People take risk to board on a ferry in a mad rush to celebrate Eid with their near and dear ones at village home amid the ongoing lockdown to prevent spread of corona virus. This photo was taken from Shimulia Mawaghat on Saturday.

Thousands of Eid holidaymakers started for their village homes leaving the capital with a mad rush despite the government order not to depart present locations to prevent the spread of Covid-19.
Homebound people were seen crossing the river Padma on ferries on Saturday, flouting Covid safety guidelines. The holidaymakers crammed into ferries in a desperate bid to get home to their families ahead of the largest festival in the country. Three ferries were allowed to ply on Shimulia-Banglabazar riverine route yesterday despite the suspension of ferry operation during the daytime.
The sudden suspension caused immense sufferings to people on their way to their village homes ahead of the Eid-ul-Fitr holidays, violating government directives against inter-district travel.
The Bangladesh Inland Water Transport Corporation (BIWTC) authorities said three ferries were given permission to ply on Shimulia-Banglabazar riverine route for emergency crossing of ambulances and some other vehicles.
At about 10:00am on Saturday, 'Kunjalata' ferry left Shimulia Ghat under Louhajang upazila of Munshiganj district on Shimulia-Banglabazar route. There were a large number of passengers along with the ambulances carrying patients and dead bodies.
Besides, at about 12:30pm, Ro-Ro ferry 'Enayetpuri' and 15 minutes later Ro-Ro ferry 'Shahporan' crossed the river with hundreds of people on board apart from ambulances and emergency vehicles.
Visiting the spot, it was found that thousands of homebound people of the country's southern region started thronging Shimulia Ghat from early in the morning. But they faced an awkward situation when they found that the ferry operation remained suspended. Though some of them subsequently returned to Dhaka, many started staying at the ghat.
Besides,the police has not allowed any vehicle to enter the ghat area since morning. As a result, passengers are walking a few kilometers to the pier.
In such a situation, hundreds of people got onto the 'Kunjalata' ferry when it was taking preparation to leave Shimulia Ghat for Banglabazar Ghat at about 9:00am with ambulances on board.
At about 12:30pm, hundreds of homebound people were found got on board the ro-ro ferry Enayetpuri. Then the 'Shahporan' ferry left for Banglabazar ghat with hundred of passengers on board. On the other hand, emergency ambulances at the end of Daulatdia Ghat in Rajbari are in dire straits due to the closure of ferry service on the Daulatdia-Paturia route. Ambulances are lined up at the wharf waiting for the river bank. Such a picture was seen all day from dawn to evening on Saturday (May 8).
As the pressure of various vehicles including long-distance public transport increased on the Bangabandhu Bridge West Link Highway, severe traffic jam about 20 km long tailback was created on road from the Bridge West Roundabout to Nalka of Kamarkhand Upazila from noon on Saturday.