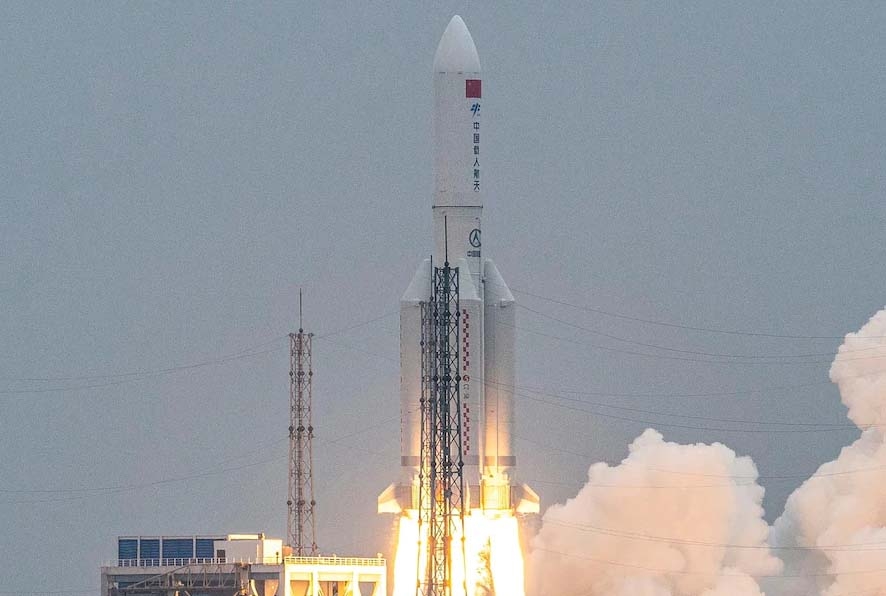 The reentry occurred at 0224 UTC on Sunday, or 10.24pm U.S. Eastern Time on Saturday, according to the China National Space Administration, reports Daily Mail Online.

U.S. Space Force has not yet confirmed the 18-ton rocket stage's reentry.

The Long March 5B - comprising one core stage and four boosters - lifted off from China's Hainan island on April 29 with the unmanned Tianhe module, which contains what will become living quarters on a permanent Chinese space station.

The rocket is set to be followed by 10 more missions to complete the station.

Long March 5 rockets have been integral to China's near-term space ambitions - from the delivery of modules and crew of its planned space station to launches of exploratory probes to the Moon and even Mars.

The Long March launched last week was the second deployment of the 5B variant since its maiden flight in May last year.

McDowell previously told Reuters there is a chance that pieces of the rocket could come down over land, perhaps in a populated area, as in May 2020, when pieces from the first Long March 5B fell on Ivory Coast, damaging several buildings. No injuries were reported.

Debris from Chinese rocket launches is not uncommon within China. In late April, authorities in the city of Shiyan, Hubei Province, issued a notice to people in the surrounding county to prepare for evacuation as parts were expected to land in the area.

'The Long March 5B reentry is unusual because during launch, the first stage of the rocket reached orbital velocity instead of falling down range as is common practice,' the Aerospace Corporation said in a blog post.

'The empty rocket body is now in an elliptical orbit around Earth where it is being dragged toward an uncontrolled re-entry.'

The empty core stage has been losing altitude since last week, but the speed of its orbital decay remains uncertain due to unpredictable atmospheric variables.

It is one of the largest pieces of space debris to return to Earth, with experts estimating its dry mass to be around 18 to 22 tonnes.

In 2020, debris from another Long March rocket fell on villages in the Ivory Coast, causing structural damage but no injuries or deaths.

The core stage of the first Long March 5B that returned to Earth last year weighed nearly 20 tones, surpassed only by debris from the Columbia space shuttle in 2003, the Soviet Union's Salyut 7 space station in 1991, and NASA's Skylab in 1979.

The first image of the rocket in orbit was released by astronomers on Thursday, with the Italy-based Virtual Telescope Project capturing the craft.

The rocket was moving 'extremely fast' when it soared 435 miles above the Virtual Telescopes Project's telescope Wednesday evening, researchers said.

Gianluca Masi, an astronomer with the Virtual Telescope Project who snapped the image, stated that 'while the Sun was just a few degrees below the horizon, so the sky was incredibly bright: these conditions made the imaging quite extreme, but our robotic telescope succeeded in capturing this huge debris.'

'This is another bright success, showing the amazing capabilities of our robotic facility in tracking these objects.'

CEO of British rocket startup, Skyrora, Volodymyr Levykin, said events like the fall of the Long March 5b 'shouldn't be happening,' calling for action to address situations like this 'before disaster strikes.'

'There are around 26,000 objects currently orbiting the planet and new constellations of satellites being launched among debris from 60 years of space missions,' he said.

'Orbital Transfer Vehicles, such as Skyrora's space tug, are on hand to help safely deorbit space debris or transport it to a disposal orbit.

'With the capability of refiring its engine multiple times, a tug can complete several missions after deploying an initial payload.'

'By integrating them as part of the rocket's third stage, we can effectively deploy a vehicle as part of every launch, creating an orbital fleet of 'space tugs' ready to be called upon when required.'

He said every future launch, regardless of who is running it, should include some form of Space Tug, to make sure the 'uncontrolled re-entries are a thing of the past.'

'It's not only about helping the planet or clearing up the mess orbiting it but about protecting the crucial infrastructure that's taken decades and trillions of dollars to build, which could effectively be wiped out in an instant.'

Last May, another Chinese rocket fell uncontrolled into the Atlantic Ocean off West Africa.

The Communist Party newspaper Global Times said the stage's 'thin-skinned' aluminium-alloy exterior will easily burn up in the atmosphere, posing an extremely remote risk to people.

That Long March 5B rocket carried the main module of Tianhe, or Heavenly Harmony, into orbit on April 29. China plans 10 more launches to carry additional parts of the space station into orbit over the coming years.

The roughly 30-meter (100-foot) -long stage would be among the biggest space debris to fall to Earth.

The 18-ton rocket that fell last May was the heaviest debris to fall uncontrolled since the former Soviet space station Salyut 7 in 1991.

China's first space station, Tiangong-1, crashed into the Pacific Ocean in 2016 after Beijing confirmed it had lost control. In 2019, the space agency controlled the demolition of its second station, Tiangong-2, in the atmosphere.

In March, debris from a Falcon 9 rocket launched by US aeronautics company SpaceX fell to Earth in Washington and on the Oregon coast.