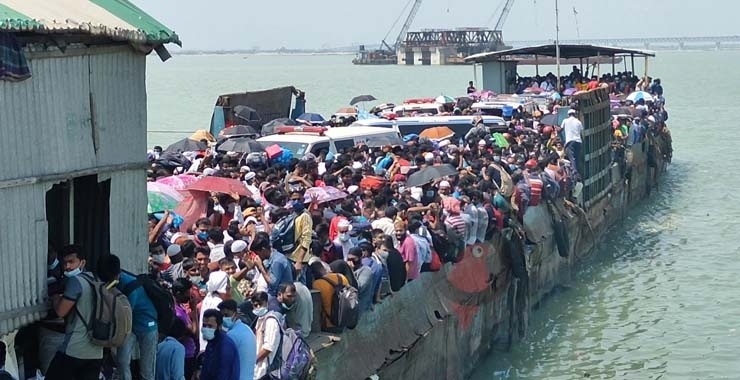 Online Desk :
An influx of homebound people has been seen at Paturia Daulatdia ferry ghat in Manikganj. People have been flocking in the ghat area since Monday morning, and this crowd is growing more and more as the day progresses.

Despite the presence of BGB checkposts in different places, thousands of people are coming to the port with various tactics. Although public transport is closed, they are coming to Paturia Aricha Ghat from Dhaka by CNG, autorickshaw, van and motorcycle on various bypass roads. Passengers are going home by violating the hygiene rules by paying extra fare as usual.

Meanwhile, the concerned authorities have announced the shutdown of the ferry service during the day to tackle the Covid-19 outbreak and to stop the passenger crossing. But due to ambulances, hearse cars and thousands of passengers, they are being crossed by 4 ferries including Rajanigandha, Banalata, Shapla Shaluk every two and a half hours.

Although the ferry service was stopped during the day, some small vehicles including hearses and ambulances were crossing. However, they are being crossed by 4 small ferries including Rajanigandha, Banalata after two and a half hours, said Zillur Rahman, DGM of BIWTC, Aricha ghat, adding: âPassengers are not obeying any restrictions. Before the ambulance and the hearse boarded the ferry, the passengers got on the ferry and crowded.â