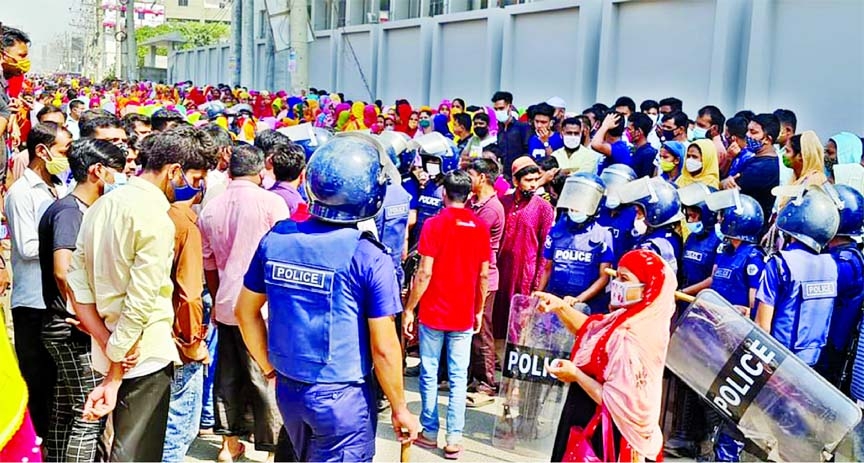 Staff ReporterÂ  :
At least 26 RMG workers were injured in Gazipur after police fired rubber bullets to disperse them during protests demanding an extended Eid vacation.
Thirteen workers, who were critically wounded in the police firing, were taken to the Dhaka Medical College Hospital, while the rest received primary treatment at Tongi's Shaheed Ahsan Ullah Master General Hospital and other local clinics.
Mamun, 30, who was shot in the leg, told media that they stopped work and gathered in front of Tongi Millgate demanding extra leave for Eid.
Industrial police said the workers blocked roads in Tongi's Mill Gate area and Biswaspara area in Kaliakoir Upazila on Monday.
"Workers of Ha-Meem Group in Tongi demanded a vacation of 10 days against the government's announcement of three days' break. They resorted to vandalism at the factory in the afternoon before blocking the Dhaka-Mymensingh Highway," said Jalal Uddin, additional superintendent of Gazipur Industrial Police (zone-2).
"When the police tried to remove them, they threw brickbats at the police. Later, the police fired several rounds of tear gas and rubber bullets to bring the situation under control."
Clashes disrupted traffic for about 20 minutes. Md Delowar Hossain, a worker of Ha-Meem Group, said: "The workers demanded a 10-day vacation in place of three. The authorities later promised to accept a seven-day break."
"At one point, the police attacked us and opened fire. Some workers were shot."
Dr Parvez Hossain, a doctor of Shahid Ahsan Ullah Master General Hospital, said at least 20 workers injured in the clashes were provided with first aid. "An injured member of the police was also treated with first aid," he said.
In Kaliakoir, workers of Star Link Design Ltd launched a protest demanding a 12-day Eid vacation.
Asma Khatun, a worker of the factory, said, "After arriving at work in the morning, the workers came to know about the three-day Eid vacation. They then halted work and took position on the Dhaka-Tangail HighwayÂ  in front of the factory in a show of protest."
Later, they went off after factory authorities announced a 10-day Eid holiday, said Gazipur Industrial Police Inspector Md Kamar Uddin.
Police have been deployed around both the factories, he added.
Meanwhile, factory authorities have agreed to meet their demand for an extended holiday following the workers demonstration.
Bachchu Mia, Inspector of the police outpost at DMCH, told the New Nation that around 12 workers came here for treatment.
Of them 11 workers already left the hospital after taking treatment. Injured are identified as Hasan (26), Mamun (25), Roni Islam (24), Mizanur Rahman (24), Rubel (22), Sohail (22), Zahidur (26), Imran (19), Rubel (26) and Sabina. (25), Kanchan (22) and Sabbir (24). Most workers have signs of injuries to their legs and backs.
In Mirpur's Kalshi area, workers of Standard Apparel took to the streets and demanded an extension of the Eid holidays.
The workers gathered in front of the 22-floor building around 12 pm before law enforcers removed them. They, however, regrouped around 2 pm, demanding that the Eid break be extended to 10 days from three.
Mirpur police said the factory authorities extended their vacation to six days but the workers were not satisfied with it.