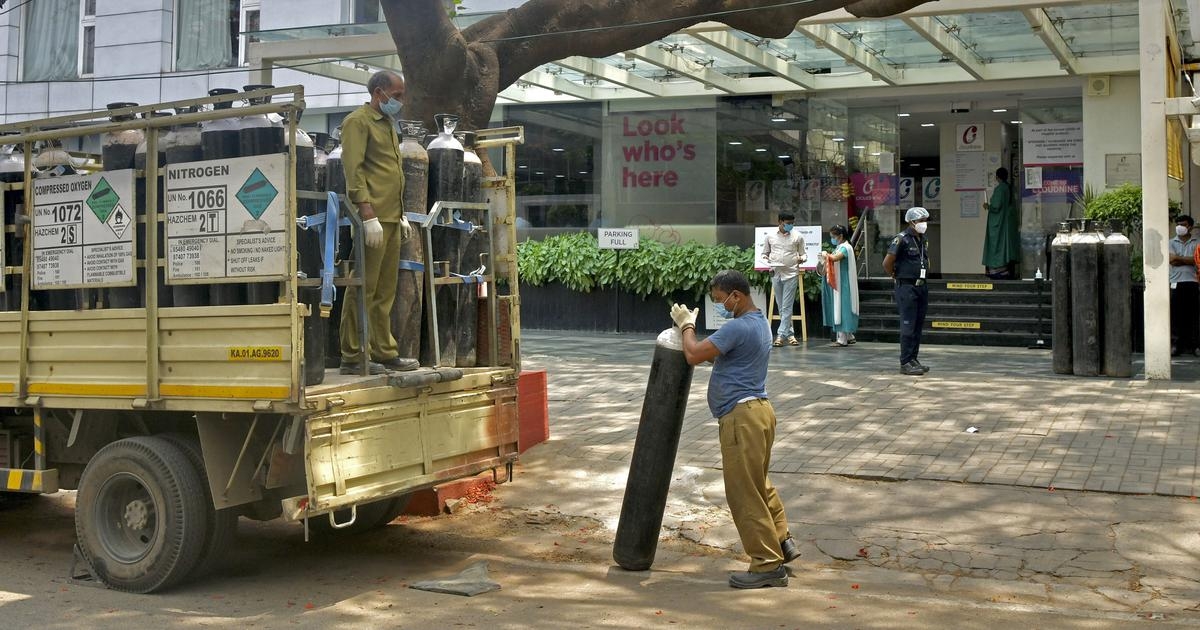 India continues to reel under the twin burdens of a huge surge in Covid-19 cases and an acute shortage of medical oxygen.
At least 11 Covid-19 patients on life support died at a private hospital in the southern Indian state of Andhra Pradesh late on Monday night due to a sudden disruption in oxygen supply, officials said on Tuesday.
The deaths occurred at Ruia Hospital in Andhra Pradesh's temple town of Tirupati in Chittoor district. As many as 700 Covid patients are being treated at the hospital.
Chittoor District Collector M Hari Narayanan attributed the deaths to a delay in reloading the hospital's main oxygen cylinder.
"The delay in arrival of oxygen tankers from Tamil Nadu had triggered the crisis. The temporary disruption led the oxygen pressure to drop, resulting in the deaths. The oxygen supply was restored within five minutes. Because of this we could prevent more casualties," Narayanan told the media.
With Prime Minister Narendra Modi's government failing miserably to stem the oxygen crisis, the country's Supreme Court on Saturday set up a 12-member National Task Force to assess the availability of the life-saving gas across the country and help resolve the crisis at the earliest.
"The rationale for constituting a Task Force at a national level is to facilitate public health response to the pandemic based on scientific and specialised domain knowledge. We expect leading experts in the country shall associate with the Task Force, as members and resource persons," the court had said.
In fact, several hospitals in India are facing an acute shortage of oxygen as the country witnesses a ferocious second wave of Covid. In the past one month, at least 100 patients have died at different hospitals in the country due to a shortage of oxygen.
Last week, 24 patients on life support lost their lives at a government medical facility in the southern state of Karnataka after it allegedly ran out of the life-saving gas.
The deaths occurred at the general hospital in Karnataka's Chamarajanagar district, some 200km from state capital Bengaluru. Hospital officials had said that many Covid patients on life support were among the deceased.
On May 1, some 12 people, including a Covid-positive doctor, lost their lives atÂ  Batra Hospital in the national capital after it ran out of the life-saving gas.
"Supply came at 1.30pm (a second tanker reached at around 4pm). But we were out of oxygen for 1 hour and 20 mins. By the time supplies came, 12 people, including a doctor, were dead. Most of them were Covid patients on life support," the hospital had said in a statement.
On April 24, Jaipur Golden Hospital, a dedicated Covid medical facility in Delhi, announced the death of 25 Covid patients in 24 hours due to "low-supply oxygen" to critical patients on ventilator.
And a day before, another leading hospital in Delhi also said in a statement that 25 patients lost their lives in 24 hours due to an acute shortage of oxygen. "25 sickest patients have died in the last 24 hours. Oxygen will last another two hours. Major crisis likely. Lives of 60 sickest patients at risk, need urgent intervention," Sir Ganga Ram Hospital had said.
It may also be mentioned here that as many as 24 Covid patients on ventilator at a government hospital in the western state of Maharashtra had earlier died after their oxygen supply ran out following leakage of the life-supporting gas from a tanker. The tanker was brought to Zakir Hussain Municipal Hospital in Nashik district to replenish the cylinders.